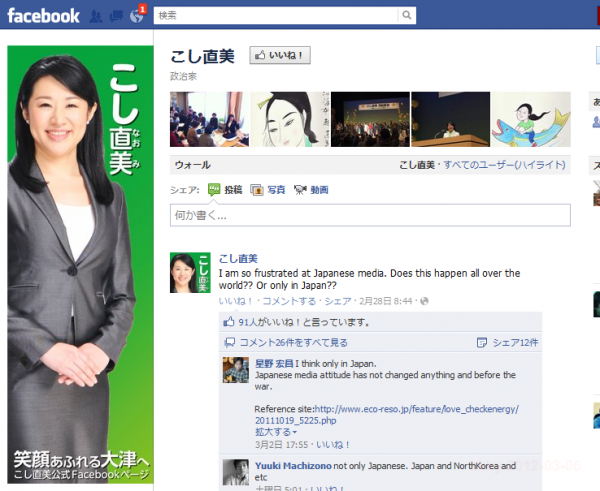 Naomi Koshi, a mayor of Ohtsu, Shiga-prefecture, who recorded the youngest female mayor when she was elected this January 2012, was reported by several national papers that she “moaned” that her opinions do not reach for her people via Japanese media in Japanese and English.

I am so frustrated at Japanese media. Does this happen all over the world?? Or only in Japan??

Yomiuri, Asahi, Mainichi, Sankei’s sports paper, etc. reported in titles with “moan”, “criticize”, “anti-media”.
Koshi answered to Yomiuri that she wanted to explain directly to her supporters, also wanted to ask her foreign friends if such miscommunications are common thing.
Like the news that video streaming of her first address making the server down, we reported last month, “politician”, “woman” and “young” seemed to be magic keywords, has been attracting some manly news-makers. This social media usage might make media disappointed.