Google is airing a commercial of its Android reference handset Galaxy Nexus, with AKB48, who is the top girls idol group, who also cooperates on Google+ promotion in Japanese.
http://www.youtube.com/watch?v=TZW2R9fPp-o
The commercial song is sung by the selected members of AKB48 for Google+, called “Gugutasu Senbatsu”(Gugu = abbrev of Google, tasu=to add, senbatsu=selection) Gugutasu is a nickname which AKB48 people gave to Google+).
Galaxy Nexus, sold by NTT Docomo in Japan since December 2011, only 4 months ago, is offered heavy discount at retail this month. Docomo runs discount campaign by the end of March for several Android models released in 2011. On its online shop Galaxy Nexus is sold at 10,800(US$130) for current Docomo users to add up. I myself saw 8,800 yen tags at a large electronics retail store in Akihabara. Some shops are selling them for free but they are rapidly sold out as 2-channel users and other individual resellers have been hunting the free ones. It does not come with any obligation (like 2 years subscription), only limitation is that you have not purchased other Docomo phone in past one month on the contract. 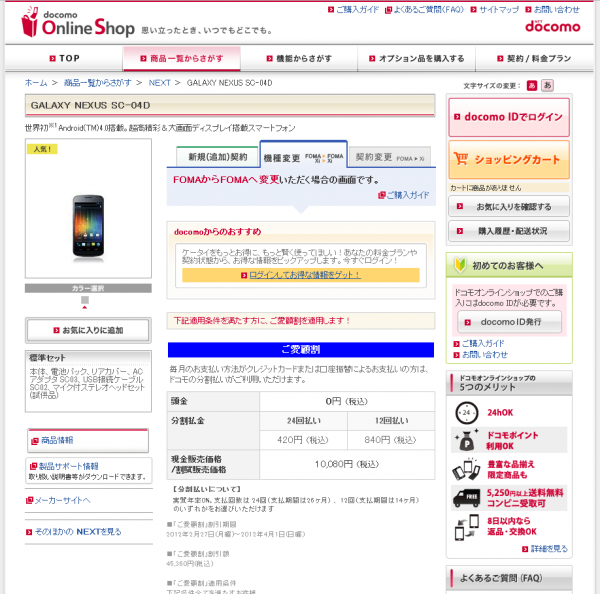 What Docomo can take from this deal is more monthly charge only if the purchasing user changed from feature phone, which fixed data plan is less expensive than the one for smartphone. Some of the feature phone user might not be using any data plan so in that case 5,480-5,980 yen more expense monthly.
Nikkei Trendy analyzed that this discount was introduced because the handset was unpopular for Japanese customers, because it does not have many features other Japanese handsets do not have, such like Osaifu Ketai(e-wallet for trains and shops), One-seg TV, no micro SD card slot, etc. They also said that Galaxy Nexus is too large for Japanese, especially for ladies.
But other 2011 models from Sony, NEC-Casio, Panasonic, Sharp are getting the similar discount. I guess that there were some mistakes on smartphone demand forecasting by Docomo.