(@cosme’s tag line on the logo is “site of everyone’s word of mouth”)
Istyle [J], who runs Japan’s top cosmetic products review site @Cosme, announced [J] on February 3, 2012, that they will be listed on Tokyo Stock Exchange Mothers (Tosho Mothers) planned on March 8, 2012. 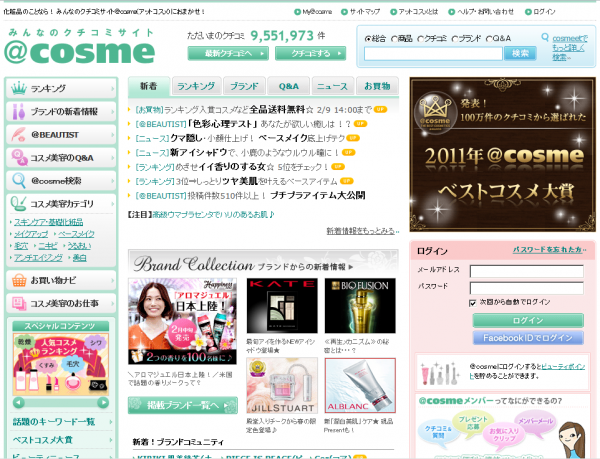 The company was established in 1999, and its service @Cosme became the leading beauty information service in Japan. 6.2 million monthly visitors exchange makeup products reviews.
Along with electric appliance review Kakaku.com and restaurant review Tabelog, @Cosme is thought as one of the most successful user generated review service in Japan.
As the reviews on @Cosme sometimes highly influences the sales of cosmetic products, there were rumors that some sellers’ review manipulation existed. Last month, after the buzz of Tabelog review manipulation news, one third party agent was reported [J] to ask @Cosme users to post positive mark with rewards. IPO must have been prepared before the Tabelog incident for long, so it is unfortunate for them if their IPO price will be affected by this word-of-mouth reputation troubles.