“Tell Your World “, the song which is used for Google Chrome Promotional campaign of livetune feat. Hatsune Mike (初音ミク) tops at iTunes Japan among all categories.
iTunes Japan chart at 19th January was following. 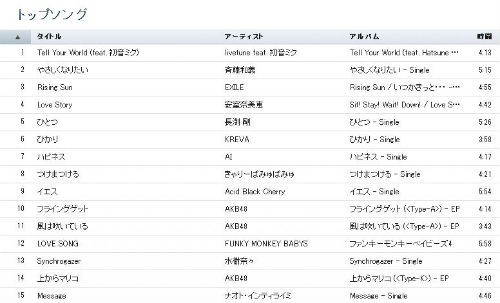 The song was released in 18th January on iTunes Japan and right after the release, ranked top 10. On next day, it ranked 1st.
Google’s promotional campaign video for its Chrome, “Google Chrome: Hatsune Miku” uses “Tell Your World.” The video depicts how Hatsune Miku, the virtual singer, has developed online creativity and tells everyone can be creator on the web.
This video has been viewed over 1.8 million times since its release in 14th December.
Great music choice, Google Japan!