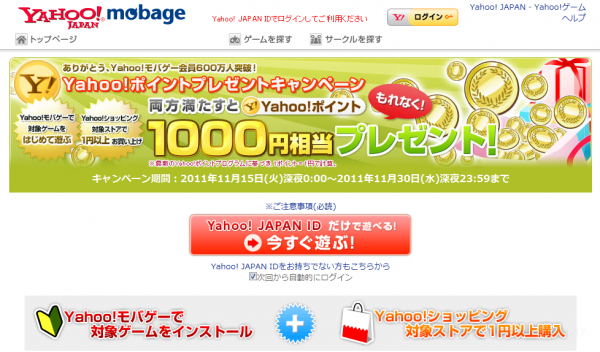 If you play any games on Yahoo! Mobage first in time, and purchase anything on selected stores on Yahoo! Shopping, you will get 1,000 Yahoo! points, which is worth 1,000 yen for shopping on Yahoo!.
Yahoo! Mobage passed 3 million users in March, 5 months after launch, so their adding latter half of the 5 million took 8 months, which is slowed-down. However, the pace is still higher than Facebook, as its active users are around 5.24 million according to SocialBakers (which is not super precise though) currently.
Indeed, people pay lots less on PC social game if you compare with Japanese feature phone social game, but Yahoo! Mobage is taking up a firm position with people who play social game on PC based social network in Japan.