Takafumi Horie, an ex-Livedoor CEO who is in Jail since June 9 this year in violation of the Securities and Exchange Law, aka Horienmon, was announced to start a new manga series on fortnightly mahjong (wikipedia) comic magazine Kindai Mahjong [J].
There are two mahjong-only comic magazines in Japan. People playing mahjong is decreasing, but that shows how it is still popular. 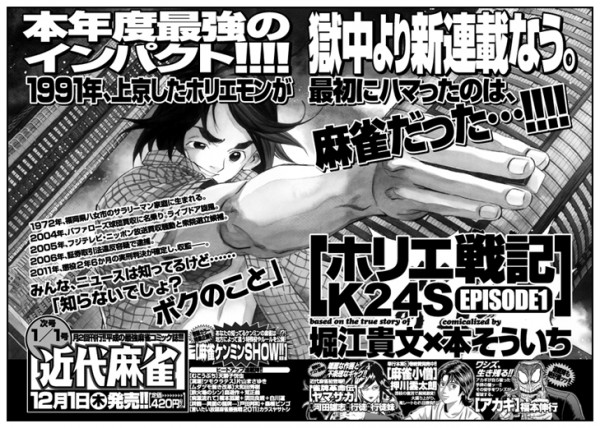 The December 1st issue forenotice above features this new series “Horie Senki K24S Episode1″(Horie’s War K24S) with most of its space. The ad has phrases like “The biggest impact on this year!!!!”, “New Series from jail now (-now is a popular Twitter jargon in Japanese)”, “In year 1991, Horiemon first got on mahjong when he moved up to Tokyo”, etc.
So this comic will be a story which young Horie, who entered the nation’s top university, The University of Tokyo, plays mahjong. Besides his many business essay books, he already wrote two novels, which are fiction but strongly models him and around.
After he left the company, the Livedoor was broken into a stock-holding company Livedoor Holdings, which was already disbanded, and the portal company Livedoor is going to be merged into NHN Japan next January.
He still keeps influences to many people by Twitter(@takapon_jp [J])( and a paid newsletter, both are updated via his agents.