According to Sankei Sports [J], DeNA, known by running a big social gaming network Mobage, is one the list of companies who are talking with TBS, a Japanese TV network company who owns Yokohama Bay Stars [J] of Nippon Professional Baseball(Puro Yakyu) [J] Se-League, to purchase the team. 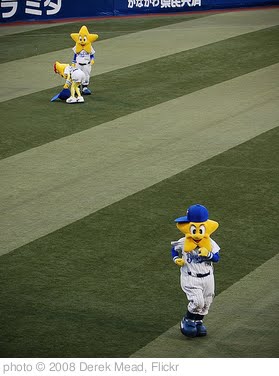 TBS Holdings tried to sell the Bay Stars last year to Lixil group, but the talk collapsed over the issue that TBS requested to keep the team in Yokohama.
Sankei reports backroom deals are in the works with multiple companies including DeNA and H.I.S., a travel agency.
In 12 top teams in 2 Japanese professional baseball leagues, where many owners post their brand over the team (like Hokkaido-Nippon-Ham-Fighters, this case region name + brand + team name), having a team means that the brand name will be called on TV news, reported on newspapers. From IT/software industry, Softbank and Rakuten have teams.
DeNA PR denied the story. Weekly Toyo Keizai points out [J] that DeNA’s interest is now on oversea operations than domestic promotion, Bay Stars might be too small as a promotion for this cash-rich company.