When Japanese are asked why Facebook, the world-level phenomenon, has not taken off in Japan yet, many answer that its user interface is hard to understand, which is strange because the UI did not keep away people in many other countries.
There might be some cultural issues which make it difficult to attract Japanese. An answer from quite uncertain direction is a newly launched information site Facebook Navi(f-navigation.jp). 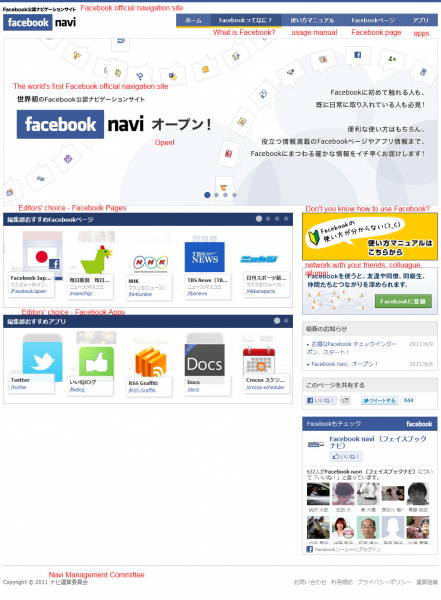 As Facebook has been translated to Japanese in 2008, all of these items must be well covered on Facebook itself, with using its social graph recommendation.
According to the about us page [J], this site is “the only one navigation service authorized by Facebook around the world”. The site is managed by Nabi Un’ei Iinkai(Navi management committee), which is noted that “there are no capital or administration ties with Facebook, Inc.”.
The lead managing company displayed is All About, Inc., which runs All About Japan [J], Japanese version of All About.
Having another official (but not related) site may show that Facebook admits that its own site is not self explanatory for Japanese. But not only Facebook can be blamed for its lack of localization, as Twitter, very successful in Japan, also has been having TwiNavi, Twitter Japanese navigation site [J] run by a subsidiary of Digital Garage, Twitter’s Japanese partner.
Different from Twitter, TwiNavi seems not so successful for me and I am unsure if it really helped Twitter’s popularity. But some net-illiterate people might became to know how to use Twitter via there, it is better than nothing. Facebook Navi could be another “learning from antecessor” idea from what Facebook saw Twitter’s Japanese success.