Tokyo-based tech start-up Mind Palette[J], who was chosen as one of the five projects that Cyber Agent support in their incubation program, released the iPhone app called Snapeee this week.   It is a picture-based social network platform that has a feature of decorating user’s snapshots, that is deeply inspired by the Japanese subculture fashion that teenage girls would prefer to get their own snapshots decorated with glitter and animated clip arts. 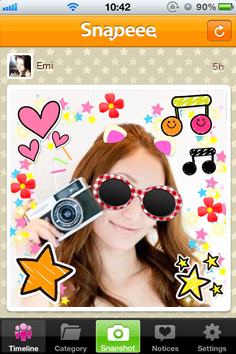 The company’s CEO and founder Yuji Kobayashi says, they’re expecting to engage potential users not only in Japan but in the world.  The app became available as short as several days ago, but it is getting large endorsements from the web community in Hong Kong and Taiwan, where the J-pop culture attracts the younger generation.