Last August, I was invited to attend Startup Saturday, a Hong Kong’s first ever remarkable tech start-up event, by Takeshi Hirano, the editor and writer for TechCrunch Japan, during his one-month visit to the city.   Then I could meet young aspiring entrepreneurs from more than a dozen of great tech start-up companies.
One of those companies, Stepcase was founded in 2007 by ex-RedHat engineer Leon Ho who is also known as the founder of Technorati Top 100 blog Lifehack.org.   He’s been in Tokyo during the last week in February, and there was a meet-up opportunity where Japanese techpreneurs and developers came together to listen to how he had developed a series of his popular photography apps for the iPhone and what he aims for in the next. 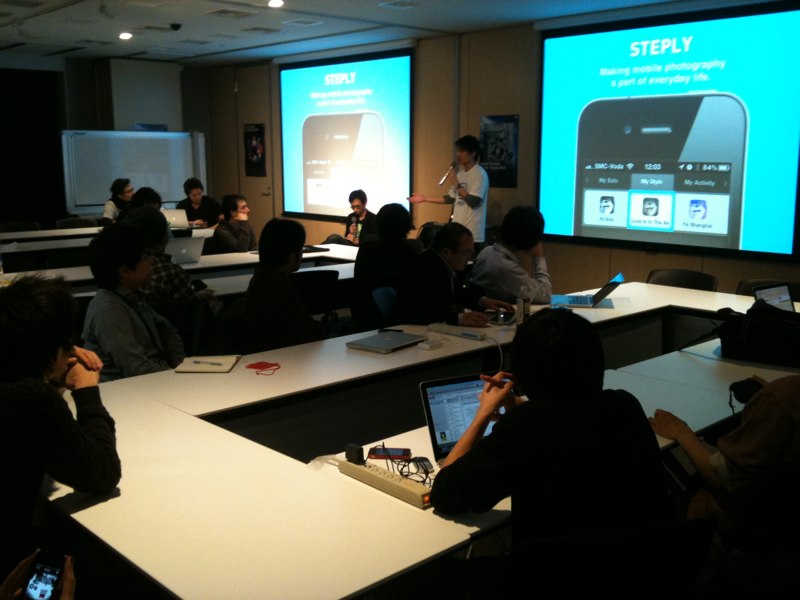 (Photo courtesy by: Dr. Yusuke Takahashi (@aerodynamics) from Individual Company[J])
Steply is the most popular app of his company, and it allows you to share location-tagged snapshots with the community friends of yours, by tapping on the iPhone screen.   It was introduced last year, and all of their photo-related apps including Steply have been downloaded by over 2 million users worldwide.   80% of the Steply users comes from Asia, Mr. Ho explained it is because Asian more eagerly want to take pictures in their daily lives than the people in the rest of the world.   Most of tech start-ups born in Asia aim to be highly evaluated in the western countries, but he said he would keep working harder for spreading his apps out among the Asian tech communities.
Steply uses Amazon EC2 and S3, some of attendees at the meet-up asked the founder if the service costs a lot for using the cloud storage in order to store such an enormous number of picture files, but he answered in the negative.   He visited Tokyo with his girlfriend Alice Lam, and she helped him promote the service among the attendees by distributing Steply’s logo printed T-shirts and stickers.   As well as holding sufficient capital and skilled system developers, having an understanding girlfriend could be necessary for a single male entrepreneur to achieve his great success, I believe.
Steply is now looking for potential photo-related apps that can be integrated with its photo community network.   If you have developed your own apps for the iPhone and are interested to participate in the network, contact them via this form.   Furthermore, the company just released a new iPhone app called LabelBox a couple of days ago, which allows you to add your choice of picture-decorated labels on any of your snapshots and to publish it to Steply as well as other photo sharing services.

(Video courtesy by: Open Network Lab) This video has some audio drop-outs. Sorry for any inconvenience this may cause.