Today February 8, some Japanese web users who are influential in tech communities like Hatena and Twitter, started reporting they were locked out from Facebook. After trying to log in, they were taken to the form, which title is “Complaints against a ban of your account, identity demanded”. 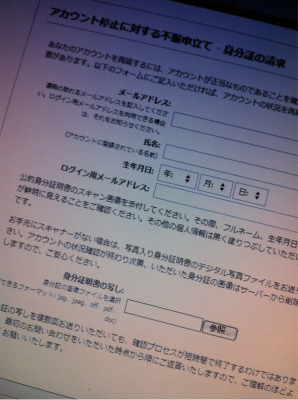 On the form, following information are asked to provide,

Some of the banned users reported it on Twitter, which are listed on Togetter [J]. There are names including an A-list blogger, popular Hatena users, web users who write not only blogs/tweets but also books and articles under their nickname.
Banning pseudo name users seem not Japan only (thanks Dominic), but many of ‘active’ social network users are using pseudo name and icon in Japan, so it may have a chilling effect on the recent Facebook boom by its movie and media coverages.
Facebook and its Japanese branch show their service’s principle. It seems to tell “If you do not like it Japan, you do not need to use Facebook”.