Clwit[J], a Tokyo-based company developing social web services and Internet security countermeasures, announced it would start an e-commerce platform using Ustream in April.   It allows you to integrate your website with Ustream and Twitter by just adding a line of iframe tag. 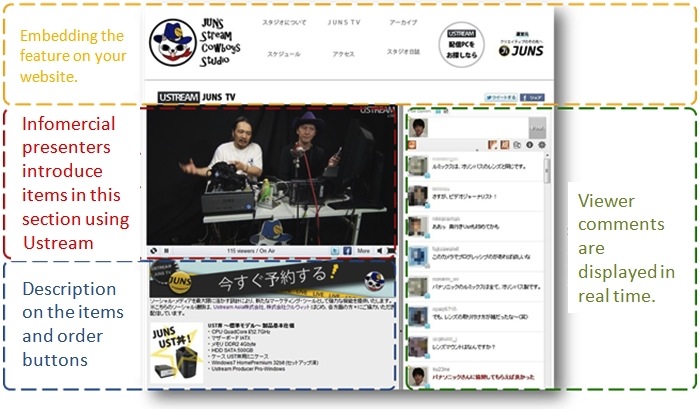 Mr. Yasuhiro Kunimine, the representative director of Clwit says, in their beta test, they confirmed adding the feature to classic e-commerce websites had gained their conversion rate by 10%-15% in average and 28% in the best case.   The service is provided on a revenue-sharing model, and no initial fee is required to apply.
Clwit has agreed with Ustream Asia, and you can choose an option of using the ad-free version of Ustream for the informercial video streaming.  Mr. Tomotaka Nakagawa, the representative director of Ustream Asia, says, “This is the first e-commerce platform where consumers can buy something after learning it via social media interaction.   I hope it will be a new business model using Ustream.”
The company expects to engage 1,000 corporate users by April, 2012.
Via: Venture Now [J]