Japan Android Group[J], a Google Groups-originated tech community of Android developers and users in Japan, held their semiyearly general assembly called Android Bazaar and Conference(ABC) 2011 Winter[J] on Sunday at the University of Tokyo. 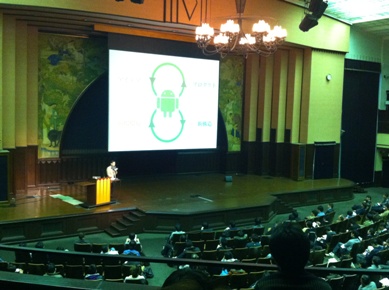 Starting with a keynote speech by Dr. Fujio Maruyama(@maruyama097), the chairman of the group and visiting professor at Waseda University, a number of the great names from Android-related industries presented what they are working on and foresaw the next step.  The group announced more than 3,500 persons had signed up for attending, and more than 2,500 persons had actually attended. 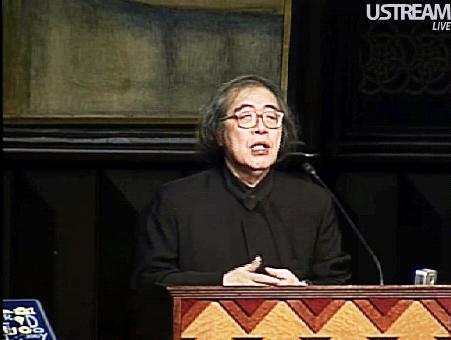 Dr. Maruyama at the conference (Source: Ustream Live by Japan Android Group)
Dr. Maruyama pointed out the recent rapid growth of Android handsets in use because Japan is currently ranked in the 2nd place in the number of uploading apps, and in the 5th place in the number of downloading apps.
At the venue for “Bazaar”, Android developers had opportunities to exhibit their Android products and services.   Let’s see some of them.

RIC Android[J] welcomed all visitors coming to the exhibition venue.   The robot is working with a built-in battery and fully controlled by an Android terminal which is located within the mouth. 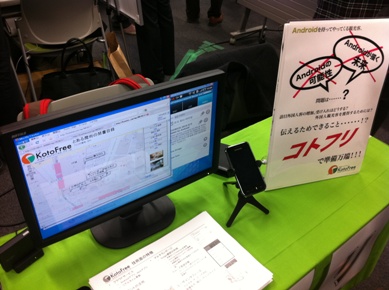 Koto Free[J] is an app for making a map multi-lingual and intended to be adopted for the “Visit Japan” campaign being run by Japan Tourism Agency. It allows you to add description on maps or images, translate them and show them to foreign tourists in their languages. 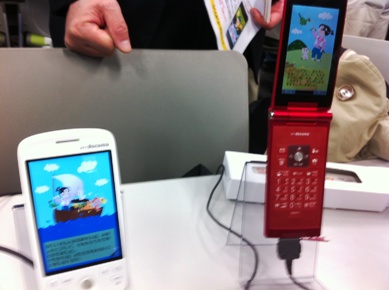 Para.tv[J], a Tokyo-based developer of the video distribution platform for cellphone, introduced a story teller app called Social Audiobook. By storing the elements of your voice in advance, the app can have your friends or children hear fairy tales as if you were telling. 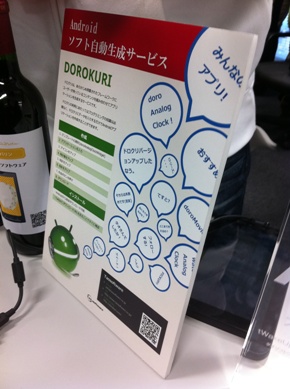 (Video source: Diginfo.TV)
Japan’s leading consumer electronics manufacturer Pioneer is currently developing a cyclocomputer running on Android. Cyclocomputers are attached to bicycles to calculate their speed and distance traveled.   Because it has GPS, the company think navigation will be a key feature. They are expecting to add applications that include navigation technology.

Tonchidot, well-known for its multiple-award winning AR (augmented reality) app Sekai Camera, unveiled they are currently developing a new service called Domo that helps you meet someone of the same interest at real events or places.  The company calls such an environment a “Transparent Society”.  Domo is a Japanese casual greeting word for “nice to see you” or “thanks”. 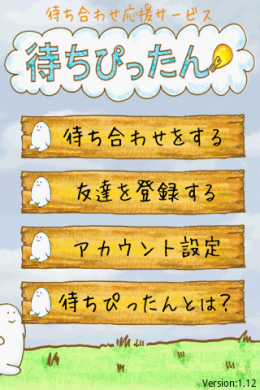 Machipittan is an Android app that makes more fun when you wait someone at a meeting point.  Developed by Tokyo-based web system developer Analog Twelve[J].  Last year it won the Android Application Award (“A3” for short) which is annually presented by Japan’s leading IT publisher Nikkei BP.  By entering e-mail addresses of you and someone you’ve appointed, the realtime locations of both are plotted on a map, and it also helps you find a good meeting point in conjunction with restaurant guides provided by the third party information providers.

Such a large number of attendees to the conference meant Japan’s android community has been heating up.  I look forward to the next conference which will be happening in June for experiencing much bigger things. 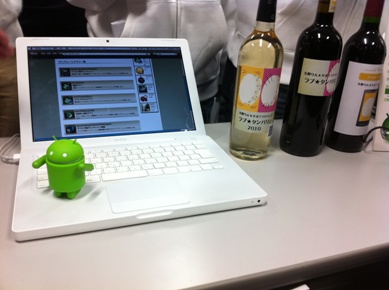