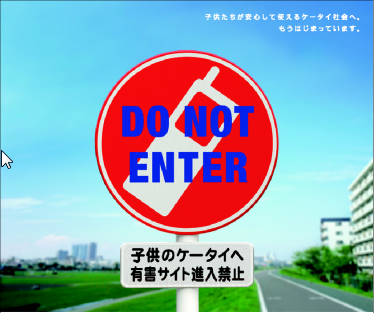 Jiji reported [J] that Japan’s National Police Agency is planning to send secret agents to 1,500 cellphone shops nationwide, to check if shop clerks ask a customer who will use the cellphone, and if s/he says it is for their children, then if they introduce kids filtering service and explain what bad things could happen without it.
The National Police Agency tells that it is to enforce “Act on Establishment of Enhanced Environment for Youth’s Safe and Secure Internet Use”, which commenced on April 1st, 2009 in Japan.The act requires cellphone carriers to set on the filtering for users less than 18 yo, but the Cabinet Office research says only 48.2% of children aged between 10 and 17 are using it.
Major Japanese mobile websites form self-regulating organization EMA(Content Evaluation and Monitoring Association) and EMA accredited members services as wholesome sites, which can be reached over the kids filter (some of the services are partially approved by excluding communication feature like forums). Small services by start-ups who do not have enough money to join EMA and foreign services like Twitter/Facebook are blocked by the filter.
Recently, the Ministry of Internal Affair sent inquiry [J] to Apple Japan not having kids filter by default. Japan’s exclusive iPhone distributor Softbank Mobile explains that it needs to get an personal ID on Apple’s website to turn it on, so they cannot force the purchaser to use the filtering app. 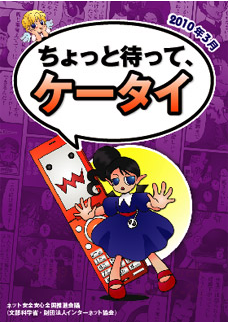 How much it costs to be examined by EMA [J]