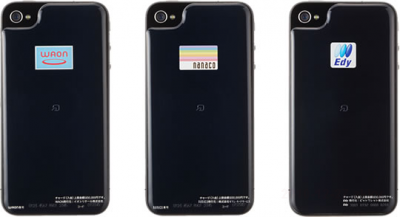 iPhone not having FeliCa, RFID smart card, is one of lamentations for users who can not give up their e-wallets function on their Japanese cellphone. One of the reasons that half of Japanese iPhone users still keeps their feature phones.
Android is planning to support NFC on version 2.3, which has the same foundation as FeliCa but can not cover all of FeliCa’s functionality. Japanese cellphone vendors have been adding FeliCa on their Android smartphones recently. There are also a few Japanese Androids which are capable in terms of hardware, but waiting on a software update to support major FeliCa e-money providers.
FeliCa functionality for three major e-money services WAON/Edy/nanaco used by supermarket and convenience store chains will be offered as different stickers in February 2011.
Each sticker costs 2,980 yen (US$36). The regular WAON and nanaco cards are 300 yen and Edy cards 500 yen, so it is pretty expensive but the stickers nicely fit with your iPhone 4. They are also tested well with Apple’s genuine iPhone 4 Bumper.
It seems for me that you can put those stickers not only on iPhone 4 but also on anything. The release does not tell if those IC-Card can be checked and charged via iPhone, or it is just a small sized version of the card-size IC card.
Softbank Mobile made another weird peripheral gadget, TV for iPhone 2 years ago.