If your language has much more letters, say 3,000 characters, than multiple times (shift/crtl/alt) of number of keys on keyboard, you need an input method environment(IME) to tell computers what letter you want to type.
There are many IMEs exist for Traditional/Simplified Chinese and Japanese. These days operating systems have those IME bundled, on Windows, MacOS and Linux. But as it affects your writing speed, some users use non-default IMEs from other vendors. In Japanese case, long-time ex-word-processor champion Just System still sells royal fans for its IME ATOK. Two world biggest search engine companies, Google and Baidu, also offers free IME applications which utilize their massive language data collected for search engine.
On December 16th, Google Japanese Input [J], which was released by Google Japan one year ago, officially shed its beta tag after a year [J].
Google Japan’s promotion video shows you how it works on browsers/text editors/office tools. You type Japanese by pronounce, then choose the appropriate conversion from suggested selections.

Because that is conversion based on dictionary, there are a lot of enhanced conversion are integrated, too. For example, conversion between western calendar year and imperial calendar year, current time to several different notations, correct word suggestion, zip code to address, letters-based emoticons, etc. Many of those functionality are also on OS-default and other third-party Japanese IMEs.
However, one quite new, and somewhat weird conversion is embedded on the Google Japanese Input. 2-channellers pointed out that you can get fortune telling on it.
When you try to find “fortune telling” Chinese and/or Japanese word on it, its suggestions list has “(Your) today’s luck” at bottom. 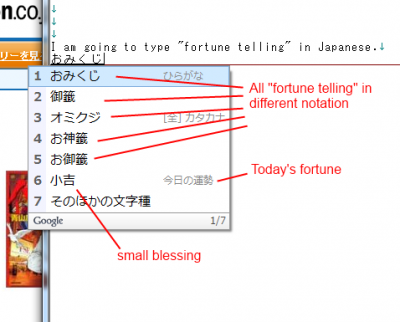 For me, it is strange that the Google offers such illogical “information”. I also tried to convert zodiac names and Japanese favorite blood types but it did not give me any prophecy, yet.