Keio University SFC (Shonan Fujisawa Campus), known as a technology hub for Japan’s Internet community in academic field, had a two-day event called Open Research Forum 2010[J] last week, where 142 research teams showcased their development results and works.
As one of them, “Densha Now” is a third-party Twitter app that shows you tweets by other passengers on your train.  By posting a tweet with geographical info, the app detects on which part of the railway you are traveling and summarize tweets which are supposed as having been posted by other passengers on your train.   The app’s website design seems really inspired by in-train overhead navigation signs.  “People on trains are always using cellphones, and they don’t care about other passengers around themselves.  Our app aims at giving them more fun when they commute.”, said Mr. Kaku Ito[J] from Katsuhiko Ogawa Lab.[J], who has developed the app and researches in-train location-based services.
“GPS Play Tag[J]” is a web-based game that allows you to enjoy by shooting geo-tagged pictures of the other players who are chased from you.  After the user registration, you are allowed to schedule a game by entering the number of players, teams and where you will have it.  Wanglin Yan Lab. has developed it for studying spatial perception of human being. 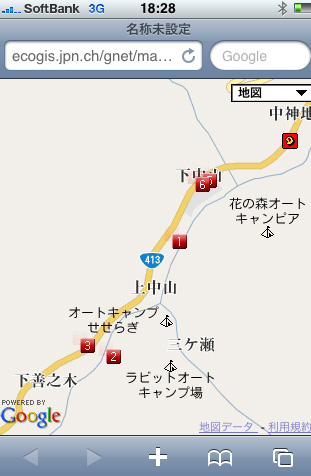