The Hyogo police arrested a Nagano guy in September under a charge of running 60 of internet bulletin boards for users to buy and sell illegal drugs online. 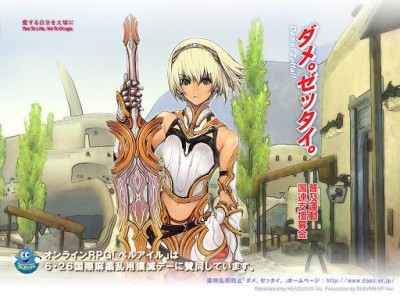 [/caption]
“No Drug” campaign in Japanese online game BelleIsle in 2006
This guy was expected to sell drugs by himself, but he talks that what he sold over the BBS were not drugs but salt and tea.
He gave his BBSs names like “Yakumi BBS”(taste of drug/medicine BBS, the Japanese word “Yaku” can be both good and bad medicines), posted ads like selling “S” and “Kusa”. “S” can be thought as “Speed”(Amphetamine) but he sent salt, “Kusa”(Weed) the buyers had expected cannabis but he sent tea leaves. “S 01 6,000yen” was supposed 0.1 gram of Amphetamine but he sent back 0.1 gram of salt. He confessed that he had earned about 15 million yen (US$178,000) by selling salt and tea. No single claim or damage report are filed yet.
Police expected to arrest him for drug dealing charge, but as there are no fraud victim and he himself did not sell drugs, it may result only in charge of “the providing aid to advertising of commercial handover” for running BBSs, which is the first applied in history.
via Mainichi and Nikkan Sports