I was visiting Singapore in late-September for attending Accelerate 2010 and meeting with great techpreneurs.   Thanks to Bernard Leong from Chalkboard, a Singapore-based start-up providing retail promotion solutions for several smartphone platforms, and Justin Lee from Tech 65, a Singapore-based gadget-focused tech blog, we could have a readers meet-up at the country’s geek hub, Hackerspace.SG, which is located at a very convenient location near Arab Street where we can take a variety of Arabian foods at any time and hear the holy Qur’an from a mosque nearby throughout the day.
If you have any chance to visit Singapore, I strongly recommend you to visit Hackerspace.SG to meet attractive people after checking out the event calendar on their website. 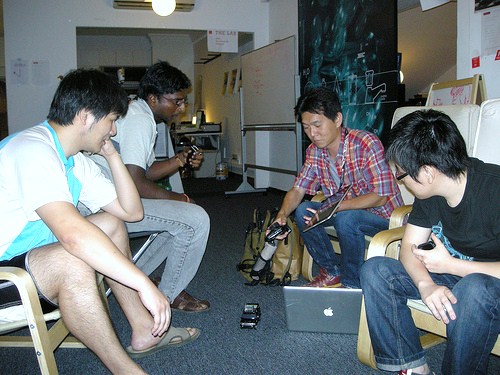 Japanese techpreneur Yoski Akamatsu (@yoski), who was visiting the country for Accelerate 2010 and enjoying watching the Formula One Grand Prix night race, also joined the meet-up, and he demo-ed his service TwitCasting with a prototype of a combination of his mobile livestream service with a R/C car equipped with the iPod.
Video image captured with the on-board camera is available live on his laptop.   During his demo, a small dinner party was underway in a room next to our meet-up.   He threw the car into the room stealthily and let it crawl into the group under the dinner table.   We could what happened in that room without coming down to the room.   They were so amazingly surprised and commented that it looked like a scene of a secret agent movie.
The camera of the iPod is laid on the car and faces up to the ceiling, that’s why there’s a mirror attached to the camera pinhole to change the angle and let you see the car’s ahead.   “Without this mirror, I’ll get busted”, he says with laughing.  (If no mirror, unexpectedly it could be a molester’s tool for peeping inside someone’s skirt.)

Miss Yan Phun (@yanphun) joined the event, she is a Singapore-based techpreneur and co-founded an event management tool called FlickEvents.   Her service is still in beta test, not opened to the public and I’ve not tried it out.  But it seems like a combination of Eventbrite, Amiando and Plancast.   She’s studying on what kind of additional features attract users more than other competitive services.   If you’re interested in using the service, visit FlickEvents’ website and ask them for a beta invitation key.

Attendee Mr. Guyi Shen is the founder of Lobangclub, a Singapore-based price comparison portal and now in Beta (available with your Facebook account).   Mr. Shen says, retailers in Singapore would not like to be listed on price comparison portals as well as the other nations, neither they don’t like to expose their retail prices of merchandise on the Internet because it may cause a harder competition on discounting among them.   He’s interested in how Japan’s largest comparison portal Kakaku.com persuade Japanese retailers to be involved and why they have made such a success.   He requested me that Asiajin should have such analysis stories.   We’ll try it.   (I just answered him for the question from my point of view.)
The meet-up was an amazing experience for me.   Thank all coming by despite traffic in the city was strictly controlled due to the car race and hard to get to the venue.    Let’s keep in touch and see you soon again.