Japanese e-shopping mall colossus Rakuten, who are cooperating with China No.1 Search Engine Baidu to open joint e-mall in Chinese web, disclosed their Chinese name [J].
The three Chinese letters, pronounced the same “Rakuten” are consist of original “Rakuten” in Japanese two letters and a new letter at the middle of original two. 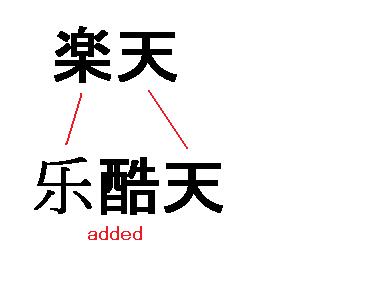 The first letter may look very different, it was simplified in mainland China, and means enjoyable in Japanese.
The second letter newly added in Chinese one means “cruel” in Japanese but Rakuten explains that the letter means “cool” in China.
The original Japanese version letters have been used in China by South Korean-Japanese food and shopping conglomerate Lotte. So there are localization conflict of brands. Interestingly, both Rakuten and Lotte own a baseball team in the same league (Pacific league) in Japan.