Japan is increasing Twitter addicts everyday. Percentage of Japanese tweets is now about 20% and chasing USA’s 27% (by TweetSentiments).
On May 30th, a Japanese girl cosplayer(= costume player, person whose hobby is wearing fictional characters costume) Jekyll Yui [J], who had been sending 50-250 tweets everyday on her Twitter account @_01 [J], stopped tweeting over 24 hours after the last tweet “Sigh…” [J]. 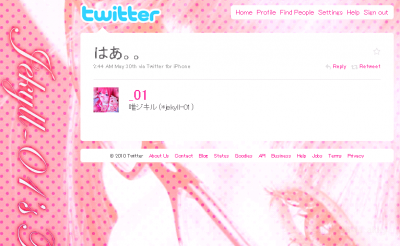 Then few of her followers (fans I assume) sent e-mails and made phone calls to her but got no response. They started worrying and asking people to redistribute their tweet requesting her whereabouts.
The request spread like wildfire among Japanese users. However, about 5 hours later, she tweeted that she had slept at a station [J].
@_01 reported later [J] that someone contacted to her father via her apartment’s manager. The father eventually called her to check if she was okay. They spread her address and real name via Twitter direct messages, which she expressed uncomfortable after knowing. Another follower was rumoured to head to her town.
@_01 tweeted “Twitter is a scary place“, then said “As such scary things happen, I cannot stop tweeting“.
via R25 on Yahoo! Japan

Related tweets arranged on Togetter [J] One of the first caller for seeking seems to quit the account.