Twitter API seems down and many Twitter client authors are trying to say it is not their bugs but Twitter’s glitch. Twitter official URL shortener experiment may be the cause of this trouble.
At the same time, mobile.twitter.com seems to accept maximum 140 bytes, which had been 140 letters. It is the same for English users but as one Japanese letters (in UTF-8) uses 3-4 bytes, now you can only make about 40 letters tweet. (I once wrote how much Japanese 140 letters can express complicate things.)
Here, a tweet with 5 times of “1234567890” in Chinese number, i.e. 50 letters, is rejected. 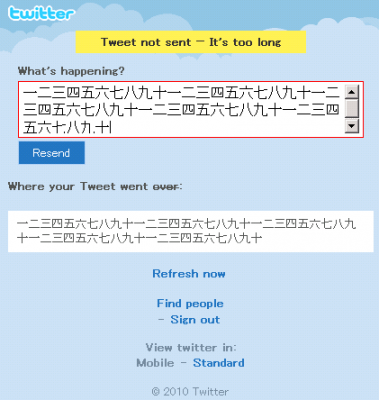 Japan has another official mobile websites twtr.jp, but I am unable to connect it. So it is unknown how wide this specification change (or bug) are happening.
PC version twitter.com works okay with 140 “letters” Japanese. And there should not be strong reason for Twitter to be harsh on Japanese(Chinese, Thai, etc.) users, so I hope this is just a newly created bug, as they are touching something on letter counting part. Length should matter!
via @matsuu [J]