Bloomberg reported that Japanese Ministry of Finance posted a silly ad to solicit young Japanese guys to buy government bonds on popular free magazine R25, which is a true story.
To Japanese’ credit, many people here were amazed by silliness of the ad project, and got angry against who spent tax for this. The magazine R25, run by Recruit Co., Ltd., distributed half an million copies around Greater Tokyo area fortnightly, is a casual magazine for train commuters in their 20’s and 30’s.
The bonds editorial ad was inconsiderate as a government ads, but the magazine is not a national quality magazine, and the article seemed to be made with a pun with the same sounds verb (“moteru”) which means “able to posses (bonds)” or “be sexually popular”.
This is a copy of the ad page (via Orange! [J]), 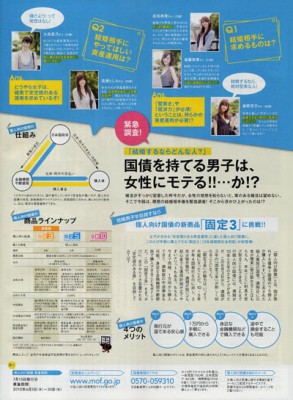 However, based on the Bloomberg’s story, CNBC wrote another news – Using Sex To Sell Japanese Government Bonds, with a photo in which a guy bathing in cash bath tub with two girls. 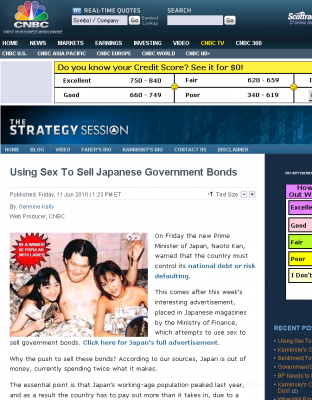 They attach a pdf file of the ad page as an evidence, with translating some texts to English, but the naked people’s photo part apparently does not fit the whole page tone. 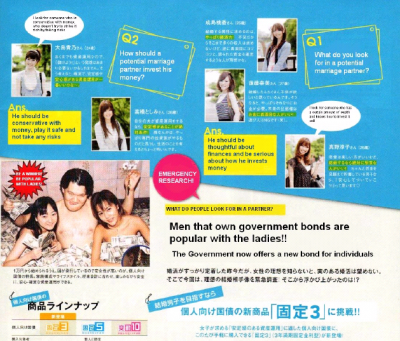 When comparing with the original (top of this page), you see the diagram part (which explains how individual can invest government bonds) was used to paste the photo.
The modified page image (before translation by CNBC) firstly (as far as I could search) appeared on an anonymous image upload service and referred from a comment on notorious Japanese mega bulletin board 2 channel.
The cash bathing image may be from “winning strategy of Pachinko” internet marketing brochure. Searching returns even some parodies.
via @aquamarine

Another Japanese bonds ads with Kabuki actor [J], which copy is “Un, Kokusai”(“Yes, government bonds”) has hidden double meaning in the same sound “Unko, Kusai”(“Crap smells bad”). Now you know in Japan, government sometimes mix punning and friendliness.
[Update] The “Un, Kokusai” ad was also photoshopped one. I did the same mistake…