On Monday, Softbank Mobile announced it had agreed to partner with some 60 companies to provide their restaurant and coffee shop storefronts with the telco’s public WiFi service called Softbank WiFi spot[J]. The service’s subscribers are also allowed to use BB Mobile Point as well, which is a public WiFi service operated by the telco’s brother company Softbank Telecom. 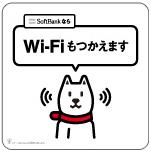 Furthermore, in accordance with Softbank’s announcement that it tries to fill the mobile blind spots and signal weak coverage areas, the company started a campaign to give away WiFi access points and ADSL Internet accessibility to offices and stores for entirely free[J]. The access point provided is compatible with Spain-headquartered shared WiFi network FON, which allows any FON users who have visited sites equipped with the access points to use Internet for free or for some charge.
See Also:
CNET Japan: Softbank’s WiFi makes you feel better to use iPhone at Starbucks stores[J]
Softbank WiFi spots – participating companies and chains: