Apple and Softbank Mobile finally started the sales of the iPad in Japan on Friday. At Apple Store Ginza or one of Apple Japan’s two flagship stores in Tokyo, about 1,200 people were queuing for having the new device. The earliest bird who has been waiting at the store since Wednesday’s 4pm was 19-year-old part-timer Takechiyo Yamanaka[J] (@takechiyo_yam[J]), and he were broadcasting the moment that he gets the first device sold in the country on Ustream. He exchanged high-five with sales representatives celebrating his effort. Let’s have a look at the Ustream video below.

Meanwhile, at Softbank Mobile’s flagship store selling the iPad 3G model, about 250 people have been waiting for the sales start as of 8am on the day. 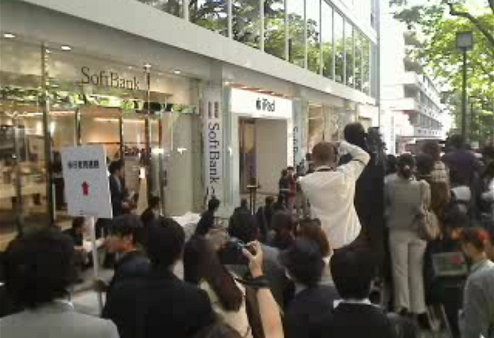 (Source: Ustream video streamcasted by Softbank Mobile’s sister company TV Bank)
Just in time for the day of the device’s sales start here, a number of the iPad related news were coming in to us as follows.