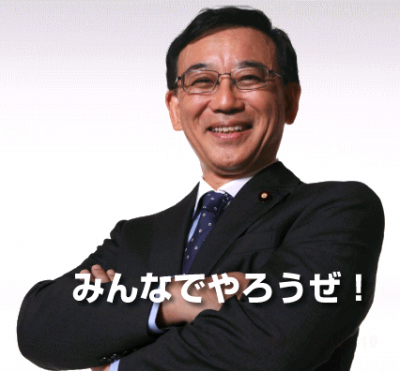 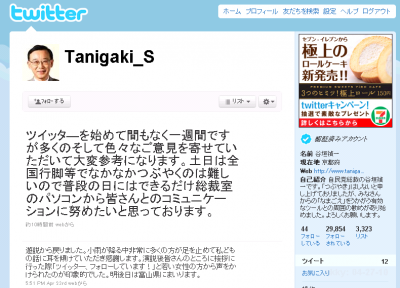 Sadakazu Tanigaki (official site) [J], the president of Liberal Democratic Party(LDP), which is a political party who had dominated Japanese politics for half an century since the mid-1950s and got debacle at last national election against Democratic Party of Japan (DPJ), started Twitter (@Tanigaki_S), with taking back his former remarks that he would never use Twitter in January. [J]
So far, he tweeted 12 messages in four days, most of which are long, close to 140 limit, with no replies(@). He quickly got about 30,000 followers but only follows 44, most of them are LDP represents.
But one tweet [J] is to thank to suggestions to follow his opponent DPJ’s head prime minister Yukio Hatoyama (@hatoyamayukio, and he followed Hatoyama’s account. @hatoyamayukio has about 540,000 followers, which is ranked 2nd in Japanese only behind everyone’s hero @Gachapin.
As we reported on the beginning of this year, LDP’s head, Japan’s prime minister has been tweeting for 4 months now. We may see tweet-to-tweet debates between two big party leaders soon.