Japan’s third-ranked mobile carrier Softbank Mobile, also known as the exclusive carrier for iPhone in Japan, will start user application for the complimentary distribution program of femtocell base stations for individual customers and small-sized stores next month. The company is considered as being relatively poorer than the other carriers in terms of the quality of cellphone service coverage, and this program aims at filling the signal-blind spots at low cost and wiping away such a bad impression among their current customers and possible customers. 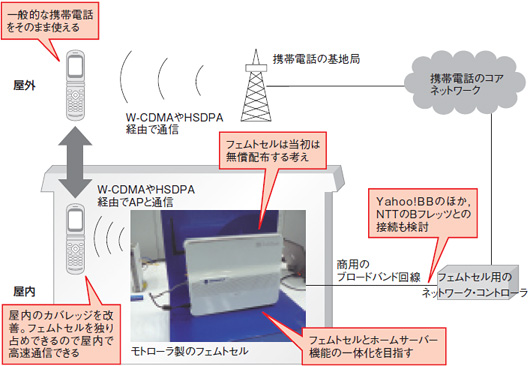 Individual applicants for the program should be subscribing to Softbank Mobile’s 3G service, and a femtocell base station with an ADSL service connecting the station and the carrier’s network will be provided for free. Store applicants have no restriction to apply, and a femtocell base station or a WiFi router with an ADSL service will be provided for free, too. The application is scheduled to be available from May 10th.
Meanwhile, some customers who have experienced signal weakness problem with their Softbank Mobile handsets at their places forced to purchase a femtocell equipment for USD120 before the program was announced. The customers complained about such an unfair deal caused by the difference of when the equipment is ordered (before the announcement/after the announcement). One of them called Softbank Mobile’s customer support for dispelling that unfair customer treatment, but a service representative answered “that’s no way” and recommended him to request the improvement on Twitter to Masayoshi Son, Softbank Mobile’s CEO (@masason[J]). Mr. Son apologized for his company’s rudeness in reply for that tweet, and he announced femtocell equipments would be provided absolutely free to all customers regardless of when the application is submitted. 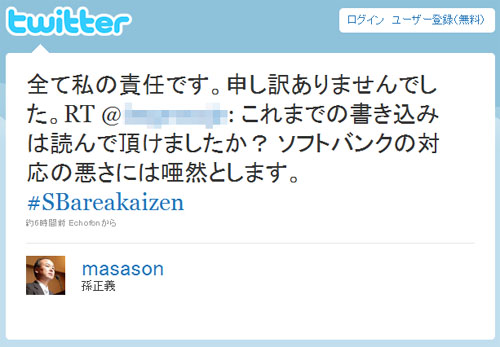