Apple’s “revolutionary” tablet PC iPad name collides with Fujitsu US’s shop clerk gear which exists for 8 years. (Engadget goes deeper)
That may remind US people Apple and Cisco’s issue around the iPhone brand. To Japanese, “Aiphone” story is familiar.
When Apple brought iPhone into Japan, they faced a similar issue against another Japanese “intercom” vendor Aiphone. Both “iPhone” and “Aiphone” can be spelled identically in Japanese, so in the end Apple compromised with Aiphone K.K.
Apple Japan’s site shows that their iPhone trademark is permitted by Aiphone in Japan. 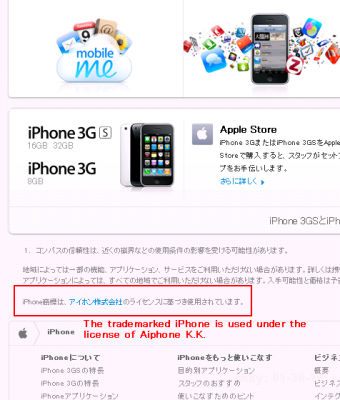 Apple/Softbank Mobile also asked media to use different Japanese spelling (アイフォーン) than the natural spelling of iPhone (アイフォン). That rule is well kept on printed media and on iPhone commercial film, but consumer do not care. i.e. people call it in more natural pronunciation.
Here is the Aiphone’s TV commercial film mixed with early iPhone promotion videos, according to it, Aiphone is used at Whitehouse.

This time, Fujitsu’s iPad was not a commercial products nor sold in Japan so Apple would not have difficulty in Japanese web search.
[Updated 2010-03-28] iPad trademark was confirmed to be handed over from Fujitsu to Apple. (via Engadget Japanese)