Probably it’s common in any city around the world that not more female geeks are appeared than males at tech industry scenes.   Except some activities that encourage more females to join this exciting community, such as U.S.-based “Girls in Tech” and Tokyo Girl Geeks[J], it is mere that we see a female entrepreneur who runs her tech start-up company.   That is very unfortunate (at least for me).

Tokyo-based female entrepreneur Kaoru Iwasaki[J] (@kaoru_iwasaki), who is an individual stock investor and the founder of her start-up Skymint[J], launched a web-based taxi-pooling assistance service called Takutomo.com[J, for mobile] last year.   Japan’s still remaining economic depression gears up the usages of her service, and it gains high reputation among the businesspersons who wish to save their living expenses but have missed the last train in this party season and are forced to come back home in the midnight.   By entering your origin, destination and the time when you need a taxi on the service menu, you are allowed to communicate with the other people having the same conditions for transportation needs.
Taxi drivers can also sign up for putting their profiles on the service and to receive a pick-up request from potential passengers in order to reduce the off-duty time in the taxi’s operating hours. 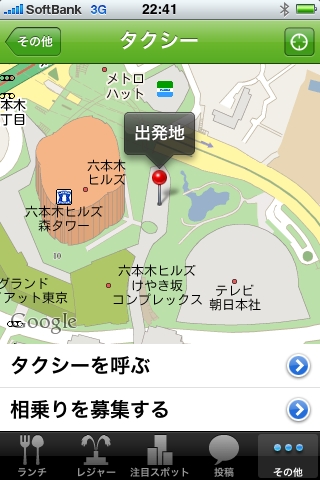 Last week Takutomo.com shook hands with 30min.[J] (Sanzero minutes, see this for more details), a popular LBS iPhone app specializing in finding local recommended diners and hot spots based on message posts consolidated from more than 8,000 gourmet blogs.  With this partnership, Sanzero added a new feature on their iPhone app, it now enables you to call for taxi-pooling companions or a discount taxi service very easily without making a phone call.   Furthermore, the service partnered with one of Japan’s largest web mapping service Mapion[J], and it allows you to call a taxi just by clicking on your current location on the map on your laptop screen.
By comparing the fares of the registered taxi services and analyzing the possible shortest route with pick-up/drop-off of you and your pooling companions, Takutomo.com will give you the most cost-effective answer of which taxi service you should call and which companions you should get accompanied with.
Don’t worry about missing the last train but enjoy a series of year-end parties until the dead of the night.
Author’s note: In order to keep the user’s safety in taxi-pooling with stranger companions, the secretariat of the service says that it is subject to disable accounts of the users who are reported as being annoying.   The system prevents canceled members from signing up another new account with the cellphone having the same caller-IDs that have been used for their previous member registration.    As far as I know, in the downtown area of Korea’s capital on Friday evenings when available taxis are not sufficiently provided, there’s something like a custom that local people are taxi-pooling to come home, which is called “택시 합승 (taxi hap-sung)”.   As reported on news media, COP15 is currently being held in Copenhagen for discussing the issues on the global climate change, and it reminds me that taxi-pooling assistance service may also contribute to the environment preservation as well.