Why don’t you experience some part of the Japanese traditions as we do from the New Year’s Eve to the New Year’s Day? Most of Japanese people, excluding those who do not like to go out home in such a cold day, will usually go to a shrine and a temple nearby for praying for peace in the new year.
There are some livestreams bringing you landscapes and atmospheres from well-known hot spots around the country. (The number of worshipers reach a peak in the midnight and at the dawn of the new year’s day at most locations. For your reference, Japan Standard Time is nine hours ahead of UTC, Universal Time, Coordinated.) 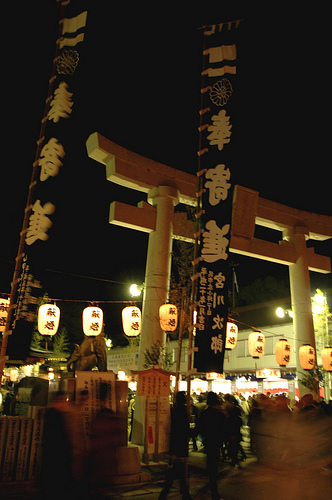 (The picture above is used under the Creative Commons License of Attibution-Noncommercial 2.0 Generic. Taken by Get Hiroshima and quoted from his photostream on Flickr.)

From all Asiajin contributors, wishing you a New Year sparkling with happiness, success and joy.