Toshio Shimoyama, a Japanese inventor living in Nagasaki, developed a new glove named “Otoko no Guu Tebukuro”(Men’s Clenched Glove), which has all five fingers totally plated [J].
For what? With this glove, you can not grope on girls or dipping your hands into girls’ cloths so you can assure that you are not the accused guy on crowded train. 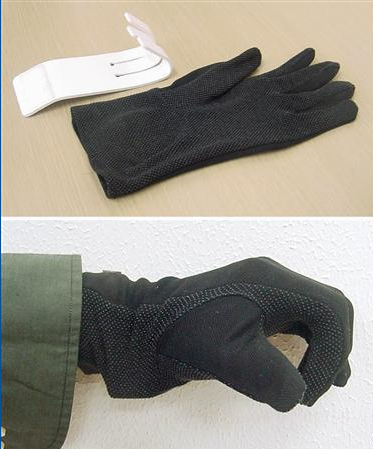 Several railway companies have been introducing “ladies only car” on Tokyo trains in last years. That implies that many ladies are meeting uncomfortable experiences.
But also, male commuters are also so worrying about the risk of mistakenly considered as a molester. There was a smash hit movie “Soredemo boku wa yattenai” in 2006, which depicted a poor guy lost everything by false charge. The movie was submitted to Japan’s nominee for Best Foreign Language Film Category of the 80th Annual Academy Awards (2008).
In 2008, there was also an incident in Osaka that a couple reported pseudo witness of molestation to expect to get indemnity [J].
Japan Railway started to set [J] surveillance cameras on one of the most crowded commuter train line Saikyo-sen since this 28th. Under this extreme situations, anxiety over police state seems to take a back seat.
via Sankei [J]
[update] fixed the spelling of “glove”. Thanks Matt.