Continued from the previous blog post on Digital Content Expo 2009.
Pull-Navi (The head mount device to navigate a holder by pulling his ears)
(Developed by Kajimoto Laboratory, the University of Electro-Communications)
That motion reminds us of a rider controlling a horse by pulling a lead rope on his back. When a controller moves a yoke on his remote control device, the head-mount device will pull its holder by the closer ear to the direction ordered. The concept of the device is highly inspired by the 40-year running popular TV animation series of Japanese sweetheart Sazae-san[YouTube, J] who pulls his younger brother by the ears when scolding him for his bad behavior. 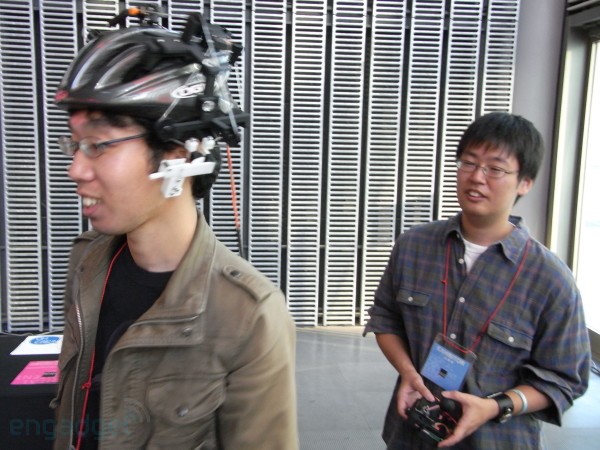 Foldy (The laundry folding robot)
(Developed by Design UI Project, ERATO, Japan Science and Technology Agency)
First, choose a laundry clothing to be folded and capture an image of it with a camera. Then the system defines how it should be folded and sets a moving path to do so.

By using an LCD and photo-elasticity, the lab team has developed a pressure-sensitive two and half-dimension interactive surface. If you press a certain point of the transparent gel, that part will be depressed. A overhead camera detects the change of refracted ray caused by the depression, and then the system changes the face emotion projected on the gel.