Love Plus[J] is a virtual dating simulation game, which was developed by Konami for Nintendo DS and went on sale at the beginning of this month.   This game title attracts an enormous number of game geeks, especially among the “herbivorous“-typed boys, living around the country, and more than 47,000 packages were sold just in three days after its release.   It is the best hit for the game development industry for the first time in long years. 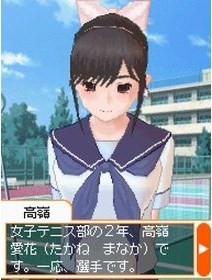 Unlike the other dating game titles ever introduced have been designed to entertain you by giving you a chance to seduce an avatar girl in the game, Love Plus is basically for experiencing events to be happened after being a couple with her.   In order to attract the players for long days, the game was intentionally designed as to make them enjoy daily routines with a virtual girlfriend, Konami says.
The player is set as a high school boy who just has moved to a city.   Then he will make friends with three scholar-athlete girls.   In synchronization with our “real” time of the day, the player will be allowed to enjoy daily events including dating with her.
A housewife posted a comment on a major newspaper’s bulletin board website last week, she complained her husband got addicted to the game.   “He’s always chatting with a virtual girl through a screen, as though he were dating with her.   As his wife, I can’t stand it any more.”   The game title is not specified in her post, but everybody supposes it must be Love Plus because of the date when it has been posted.
Some people says, they reply to an e-mail from an avatar girl of the game prior to doing so for their “real” girlfriends.   This game addict may accelerate the tendency to put off “real” marriage and cause lower birth rate in our “real” community.
Via: J-CAST News[J], Sankei Shimbun[J] and IT Media Gamez[J]
See Also: