On Friday, Tokyo-based website development company Level-Q[J] launched a brand new webzine named “Tokyo Nylon Girls[J]” after the synthetic fiber symbolizing a girl, because it is finer than a spider’s thread, more shiny than silk, and more solid than steel.
Rie Tomimoto[J], also known as Jibunya 24[J] (see this article), serves as the editor-in-chief of the webzine, and a dozen of girls living around the city contribute their small talks on it periodically (or not periodically).   The webzine specifically focuses on unveiling the real intentions and “ecosystem” of girls (meaning females in their 20s and 30s in this case) living in the city. 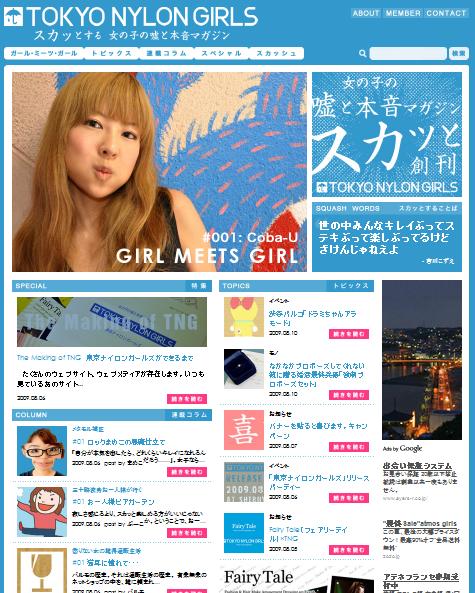 My guess is, the webzine’s content seems like what Japanizing “Sex and The City” minus sex plus lies equals.
Meanwhile, several guys were highly inspired by the Tokyo girl’s webzine and might launch a new one called “Cotton Boys Japan[J]” by the end of this vacation season.
Correction: In the first edition of this story, a guy from Kyoto-based social bookmark service company Hatena was introduced, and it said he would get involved in releasing the Tokyo girl webzine’s expecting counterpart, but we learned he has nothing to do with that.   Plus, the counterpart to be published in inspiration by the Tokyo girl’s webzine was introduced as the title of “Kyoto Cotton Boys” incorrectly.   We apologize your inconvenience that this may cause.