Hatena, known by a million geekiest loyal users and the most popular social bookmarks service in Japanese [J], announced that their joint project with console game giant Nintendo “Flipnote Hatena” launches in North America on 12th, in Europe on 14th August (both in local time). 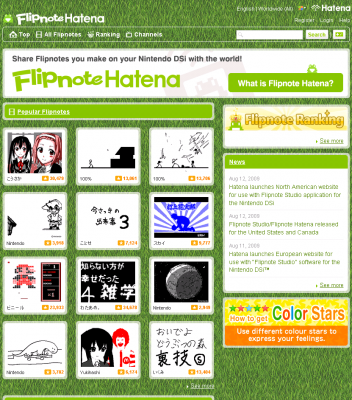 Flipnote Hatena is a CGM service on where users draw and share flipbook-like animations. Asiajin covered its first Japanese release before.

Although Hatena did make English version of few their services, this is their first challenge for other European languages and regions. FLipnote Hatena site has 6 language selections (English, French, Spanish, Italian, German and Japanese) and 4 regional choices (Japan, Americas, Europe and Oceania and All). 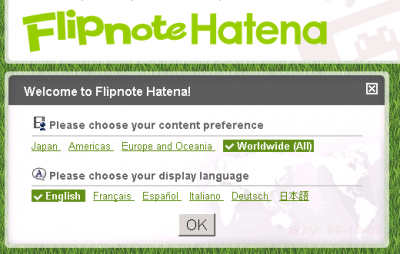 If you chose “All(Worldwide)”, you see a lot of Japanese created and starred (=voted) over thousands flipnotes at the top, some includes Japanese languages, but if you filter by America or Europe, there are already many flipnote animations drawn by local users.