This coming Sunday, Toei Animation, Shueisha[J] and Fuji-TV will start broadcast the popular Japanese TV animation series “One Piece” on the Internet for North American audience, in association with U.S. based largest Internet animation distributor, FUNimation Entertaiment (inaccessible from Japan). Every episode will be available just one hour after its original broadcast in Japan. 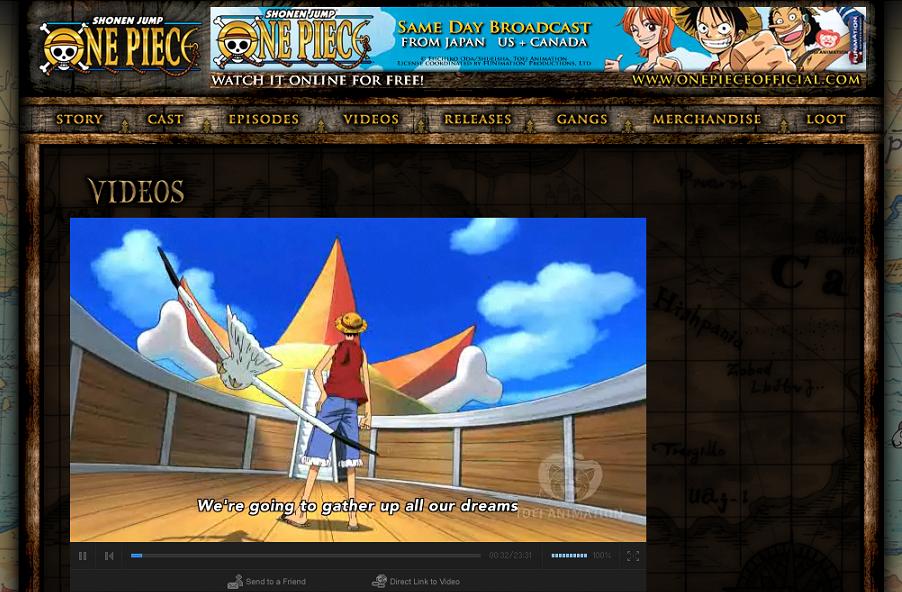 (c)Copyright Eiichiro Oda, Shueisha, Fuji-TV and Toei Animation
OnePieceOffical.com (Accessible only from North America in order to avoid international copyright conflict)
“One piece” is aired every Sunday at 9:30am J.S.T. on Fuji-TV and its affiliate nationwide network in Japan, and the same episode will be available on the series’ official website throughout the week starting at one hour after the broadcast in Japan. (Every Saturday, 9:30pm ET, 6:30pm PT in U.S. & Canada) You can enjoy watching both English subtitle-captioned edition and English-narrated edition of the title for free on major Internet video distribution networks including Hulu and Joost as well.

Meanwhile, last month, VizMedia, a U.S. local subsidiary of a well-known comic publisher Shogakukan, started the same day release of Rumiko Takahashi’s popular title “Rin-ne” on her official website. A new episode comes out every Wednesday, and her fans can sign up an account for free and enjoy reading it at any time.

(c)Copyright Rumiko Takahashi and Shogakukan
The Rumic World (Accessible only from North America in order to avoid international copyright conflict)
These moves are definitely good for manga/anime lovers. In exchange for distributing copyrighted materials to the public for free, manga and animation publishers are aiming at expanding their business opportunities and restraining pirate editions spread by releasing new episodes on the same day when its original edition comes out.
See Also: