Coincidentally I write up several stories featuring video services using media other than terrestrial TV broadcast system in this Japan’s serial holidays season.
Nintendo and the world’s largest advertising agency Dentsu started Friday a video broadcast service on a 3D virtual world designed for Nintendo’s game platform Wii. The new service is named “Wii no Ma”, meaning a living room of Wii, and it is broadcast video programs expecting to be viewed by family audiences, that’s why it will have no PG-rated titles. 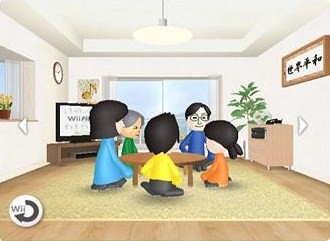 In contrast to the private broadcasters that need to bring programs which can commit high viewing rate and the sponsor’s satisfaction, Nintendo’s new service allows to put programs that producers want to present on experimental basis.
The service is entirely free, and the program viewers can comment on what they’ve watched and send it directly to the producer. After each program is viewed, you will be taken to the chatroom presented by the program sponsor. As of this writing in early May, there’s only one program of African elephant’s ecosystem, which is sponsored by Seven & i Holdings owning Seven Eleven convenience stores, Ito Yokado supermarkets and Japanese division of Denny’s restaurants[J]. After you finish viewing the program, Seven & i will give you a simple yes/no question in the chatroom: “Would you like to go shopping to Seven & i Store?”
Nintendo’s president, Satoru Iwata emphasized the following points making differences from traditional advertising revenue based media. (link to Mr. Iwata‘s presentation[J], 24 min 43 sec)

Advertising agencies and large-sized enterprises, which used to sponsor top-rated TV programs, are seeking for a new media allowing them to appeal their products to consumers because…

You’re allowed to copy video titles from Wii to a tiny game device DSi, and it makes you possible to watch them even not at home.
The following is a video introduction provided by Nintendo, which tells you how to enjoy the new service. (Narrated in Japanese, 3 min 33 sec)