On Tuesday, NICT (National Institute of Information and Communications Technology) held its annual conference providing telecom-related start-ups the opportunity to present their business plans.   An audience of more than 200 attended the event in Akihabara. 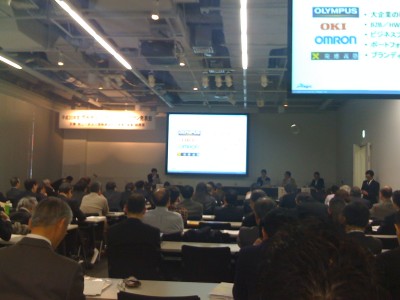 NICT is a governmental venture, incubation, and research organization with a special focus on future telecommunications technology development, and is an arm of Japan’s Ministry of Internal Affairs and Communications.
In total, five companies were chosen to present. Let’s take at look at their services one by one.
Peace Mind Corp. [J]
– providing mental health counseling services for corporations and individuals.
As work environments are becoming more demanding, especially in the systems integration industry, (e.g. shorter delivery dates and more mission critical requirements) more and more engineers and programmers are getting depressed and being forced to step aside from their daily jobs.   The company has developed a web-based application service, which helps a client company’s personnel department manage the status of each employee who has been depressed in the past or may be in the future.
Peace Mind has served 300 corporate clients since 1998 as the country’s first online counseling service in partnership with clinical psychotherapists nationwide.

The picture above shows an example of tools measuring accumulated fatigue. The concept is based on the guidelines announced by Japan’s Ministry of Health, Labour and Welfare.   (Quoted from Peace Mind’s promotion video.)
Valtes Corp.
– providing outsourced testing facilities for content providers, to confirm whether content designed for television data broadcast channels run correctly with TV tuners and handset receivers.
The company developed its own original keystroke verification machine, which enables 24/7 automatic testing of multiple models without human operation.  TV broadcasting here in Japan is scheduled to switch over completely to digital transmission by 2011, which may accelerate demand for their service.
Knowledge Creation [J]
– vds or Voice Delivery System, providing SaaS-based speech synthesis of the screen output of websites and web-based applications.
You can easily add Knowledge Creation’s speech synthesis feature to your websites and web-based applications without any difficulty.  It makes it easier to build user friendly websites, especially for blind people or elderly people with far-sightedness.
The service won the annual award for “Software Product of the Year” in 2008 [J], which was presented by the Information-Technology Promotion Agency.   The company’s English-learning website “mimi-kaki[J]” (which means ear pick) uses this technology and won “Akky Akimoto’s Special Award” in 2008 at “Mashup 4th“, a brand new web application championship organized by Sun Microsystems and Recruit.   (Asiajin‘s co-founder Akky Akimoto served as an award judge at the event.)
iidev Co., Ltd. (internet infrastracture development) [J]
– AltPaper, providing SaaS-based OMR (optical mark recognition) services as well as offshore data-entry outsourcing.
iidev’s objective is to remove simple and routine data entry work from offices nationwide.  Basically, specially-designed devices are required for deploying OMR systems. If you choose to use their service instead, all you have to do is buy a consumer scanner, set up an Internet connection, and create the desired form to be filled in using your word processing or spreadsheet software.
The service also has the ability to make a diagram representing statistics collected from the answered forms.
Brand Dialog [J]
– GRIDY[J], providing SaaS-based free groupware for corporate users.
Do you remember the project called “SETI@Home“?    It is UC Berkeley’s scientific experiment that uses computers in the Search for Extraterrestrial Intelligence (SETI).   This project employed grid-computing technologies in which volunteers participating in the project donated unused CPU and storage resources from their own PCs. The project easily procured the resources for calculation and search processes requiring more power than an average super computer has alone.
The reason why Brand Dialog can provide their service free of charge is based on the same idea as mentioned with SETI.  In exchange for unused computer resources provided by users, the company provides its groupware services for free.
Its business model and its customized grid-computing technology named “promotional grid” have been submitted to several patent authorities in Japan, the U.S. and Europe.
GRIDY is now in beta and scheduled to start user registration in the middle of this coming February.
Proofread by: Sean O’Hagan