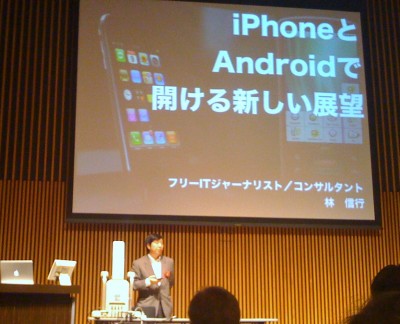 The event started with a keynote speech by famous IT journalist Nobuyuki Hayashi, who is well-known as the author of many iPhone-related books and an organizer of the Japanese iPhone developers’ presentation held near the MacWorld Expo venue in San Francisco this month.   He emphasized that Internet-accessible pocket-sized devices like Apple’s iPhone and Android-based phones from Google will change our way of living, including the way we collect useful information in every aspect of our lives, and how we share our activity statuses with others.
More than 50 companies and individuals submitted plans to the competition, while only five entries were chosen as final candidates to be presented with an award.
First, Tomonaga Tokuyama and Kenichi Yoshida from dropping Inc., a team of freelance programmers and freelance user interface designers, gave a presentation about their product and idea.   (Although their name ends with “Inc.”, they’re not actually legally incorporated.   The “Inc.” is there only as a convenience.) 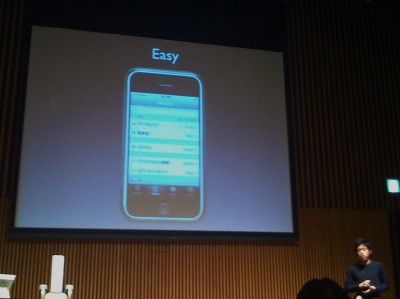 They have developed a social household accounting app for the iPhone called “Penny”.   While nobody is a big fan of recording their daily expenditures in a notebook, the idea is to make it more enjoyable by having users enter their spending records on their iPhone without leaving the shopping mall (rather than after arriving at home), and also by anonymously sharing this data with other app users.
Second, two Kansai University graduate school students from Osaka introduced their iPhone-based service for public-transit, especially for buses and taxis.   Compared to timetables and navigation for railway networks, it is harder to get this kind of information for bus routes on the Internet, and there is also no easy way to call a taxi in a rural area without finding the local taxi company’s phone number. 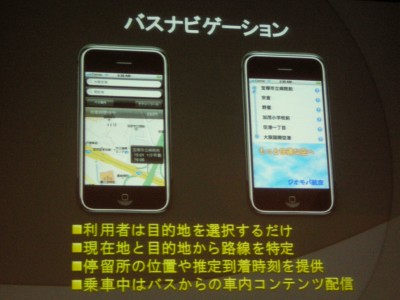 Their approach is to synchronize the status of every bus with the bus service operators and to provide phone numbers of taxi companies, in order to give users the best way to get to their destinations using GPS information acquired from your handset.   Using the service, you can see the latest status of the bus you intend to use, whether the bus is earlier or later than scheduled due to traffic conditions, and how many minutes are left until the bus reaches your intended stop.   A taxi menu predicts the cost of the trips to your destination using each taxi operator, making it possible to locate the lowest-cost operator in the area and request a pick-up.
Dr. Fujio Maruyama, visiting professor at Waseda University and chairman of the Japan Society of Android application developers[J], and his associate Dr. Noritsuna Imamura introduced their ideas in the third presentation. 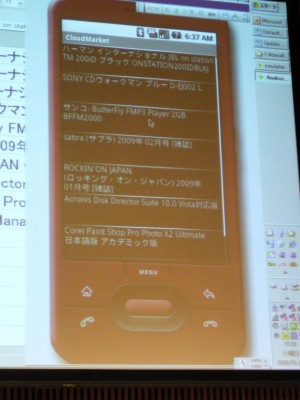 They call their idea M4, which stands for Multi-Modal Meta Market.   M4 is not a completed service and is just at the concept stage, and is a third option following the iPhone App Store and the Android Market.   App users will be able to share their opinions and developers will be able to sell their products, without any intervention from cellphone network operators, handset manufacturers, or cellphone app platform builders such as Apple and Google.   iPhone users cannot download iPhone apps from sites other than the iPhone App Store and unless Apple officially approves them, unless their iPhone is jail-broken.   Therefore, the idea of the two scientists’ is focused on creating a market for Android-based smart phones, which are specifically designed in accordance with Android’s open source policy, and the platform’s specifications are completely open to the public.
In order to explain their concept visibly, Dr. Imamura demonstrated an example, which uses a group of databases running in a so-called “cloud” environment, uploading data from PCs and downloading it to users’ handsets. (See the picture above.)
Fourth, Tokyo-based mobile application development venture Field System Inc. introduced their invention to transmit URLs by encoded sounds, called Sound Code. 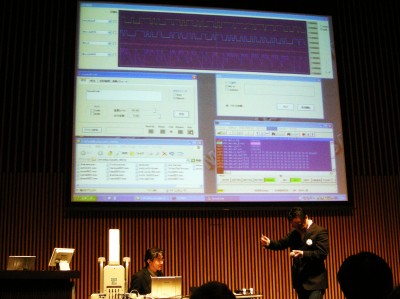 The system uses encoded pulsed sounds within the auditory threshold.   For instance, by putting the sound codes on a TV’s audio channel, mail order companies could easily guide their potential customers to their cellphone order screen, which could reduce telephone order center costs.   By including the codes in an announcement broadcast in a shopping mall, shoppers could easily get details about bargain sales.
Finally, the fifth candidate was Ring Back Web (RB Web)[J], which was developed by Mr. Shin Hiraide and an employee from his company Keytel, a Tokyo-based venture for Internet application development and patent licensing. 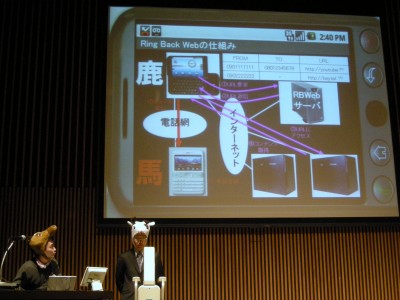 When a cellphone call is made, instead of a ring tone, the caller can show the receiver any video the caller has uploaded to RB Web’s server via the Internet in advance. (An explanation video is available on YouTube here.)   Development has already been completed for Android-based handsets.
By inserting commercial messages instead of the caller’s video, it would be possible to design a free cellphone business model, in partnership with an MVNO (mobile virtual network operator) having the power of ad sales. 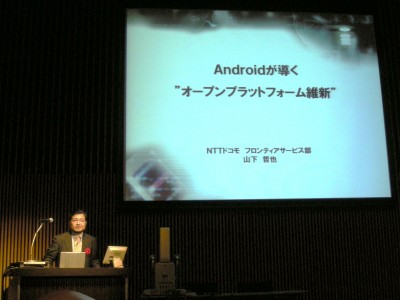 Mr. Tetsuya Yamashita, who is the lead of Android-based application development and strategy planning at NTT DoCoMo, wrapped up the event with his keynote speech. He pointed out that they would aggressively endorse cellphone application development on open platforms such as Android.
The competition’s award winners are as follows: