In US airports, many people can be seen using their laptops plugged in to nearby outlets. If you do that in Japan, you could be arrested by the police.
In February 2004, a man using a power outlet in Nagoya Station was questioned by railroad police. The case was reported to the prosecutor’s office as a theft of one cent worth of electricity. It is not known whether the man was prosecuted or not.
In September 2008, a university student charging her cellphone in Sagamihara Station was questioned by the police. In this case, a passerby had reported the “incident”. The student was reprimanded, but was later released without charge.
A blogger reported [JP] that Haneda Airport uses non-standard power outlets (NEMA L5 receptacles) instead of standard Japanese outlets. He suspects that the airport authority wants to prevent travelers from “stealing” electricity. 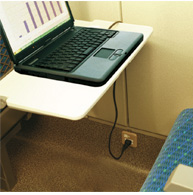 Japanese society sometimes enforces minor rules too strictly and resists societal changes, but not everyone is opposed to change. JR Shinkansen bullet trains now offer power outlets to all window seat passengers and all first-class passengers on their new N700 series trains.