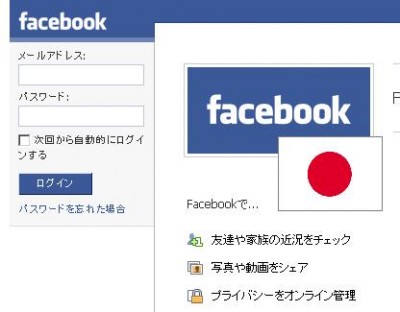 Last month I was asked some comments on how Facebook will do in Japanese market by other media. Unfortunately my comments were not taken so I post my answers here.

What is the biggest obstacle for Facebook in Japan?

The biggest problem is lack of Japanese applications. I agree that Facebook third-party applications are a good driving force which Mixi, Mobage-Town and Gree do not have (so far).
However, most of them are not localized, even though the main menus are translated by volunteers. Current Japanese users are English-friendly techies and enjoying English-origined applications. But most people do not like any English menu/contents on website except something used as design accent (roman alphabets are thought as “cool” for Japanese youth. As some western people love Chinese letters tatoos).
If, even if Facebook can get attentions of Japanese developers, and let them make all-Japanese facebook applications, then another problem comes up. What happens if a Japanese user invites his/her English friend to the Japanese application? System localization does not cover application menu localization, nor application contents localization.

Mobile adoptation is another issues. Mobile sites provided by US net services are usually a simplified version of the original websites. But most popular mobile sites in Japan are independently designed for cellularphone browsers by using a lot of celluarphone specific capabilities.
DeNA making a big Social Network market only on cellulerphone, Gree is rapidly increasing its users by their mobile site, Mixi now having more mobile access than PC access, all of them shows how Social Network matches good with people who
wants to spend time on their cellularphone during their spare time. On the other hand, Facebook mobile does not, and I’m sure will not, support them.

So will it fail?

I think they cannot be a popular player. Many other foreign social networking like Xing, MySpace, friendster made Japanese menu but none of them are successful. Menu localization is a necessary first step, but there will be a lot of works to make it real Japanese website.

Are there any other successful Web 2.0 products in Japan? If there are, why?

Twitter and YouTube succeeded even before their translation. On these two services, the main data do not require English ability. In YouTube case, huge number of funny videos could be enjoyed without knowing English. On Twitter, if all of your friends are Japanese you will not see any English tweets. That is the reason.
Usually, US Web2.0 sites success are followed by Japanese clone, instead of the original servicers. Hatena Bookmark instead of del.icio.us, some smaller players instead of Flickr, not bloggers/livejournal but many Japanese blogging services.
If you wait until getting big in US/English, there will be Japanese followers appeared soon. Rapid localization is the key. And that happens every non-English, big-enough market, I guess.

Are there other successful web 2.0 imports that have simply translated the site?

Wikipedia Japanese. Wikipedia’s concept was totally drastic so it might take too much time other people in Japan considered its clone. In other words, no one could imagine it would succeed. Also, in Wikipedia case, most users only view the site, as editing entries require you to know rules/manners. That’s different from Social Networking Services on where most users are supposed to contribute some contents.

How do you think about user-contributed menu translation?

It is clever. Many major Open Source applications have been doing that, too. Utilizing bilingual users for localization is a good Web2.0 style. Facebook is not the first net service to do that, many others taking similar method failed even with the budget translation cost.
It was a cost-saver idea but not a key to localization success.

I will write general problems when social networking service tries to localize themselves in another post, hopefully soon.