This month’s Tokyo2point0 event again took place in Harajuku and again it featured two great presentations. This time both speakers were Japanese!

Behind the doors of Cybozu Labs

Akky is one of Japan’s most famous tech bloggers. In fact, he is a professional which is very rare even in this blog-crazy country.
His company-sponsored blog on Web 2.0, IT and Tech stuff is, for example, ranked at No. 12 in Japan on feedmeter. It is No. 23 according to the list of the most popular blogs from the livedoor Reader (the favorite among Japanese geeks).
Before becoming an A-lister blogger, Akky started his career as a programmer whose speciality is internationalization and release engineering. His international career includes stints in Vietnam, the UK and the USA where he used to live in San Francisco. Akky is also authoring books and columns in various Japanese high-profile Tech media.

Cybozu is an independent vendor of packaged software (focusing on groupware), directly competing with powerhouses like IBM/Lotus or Microsoft (Exchange). The company was founded in 1997 and listed at the Tokyo Stock exchange just 4.5 years later (in record time at that date). Almost unknown in the west, Cybozu now serves 26,000 customers (2.5 million end users) in Japan. In its market segment, Cybozu has the largest market share in this country.

Akky went on saying he is actually working for Cybozu Labs, a 100% subsidiary of Cybozu.

Cybozu Labs is a completely separated entity: geographically, culturally and economically. I have seen the Labs office myself and can confirm the very Non-Japanese environment there! It was established in 2005 by the parent company to attract engineering talent, to accelerate business development and to boost global competitiveness.
According to Akky, the now 12 engineers quickly managed to earn a lot of respect in the Japanese web community. As a side effect, general attention in the media and tech community was created for Cybozu itself. Given the drastic shortage of talent in Japan’s IT sector and the tendency of Japanese people to prefer big-name companies for employment, the establishment of Cybozu Labs must actually be seen as a very smart move.

Akky presented a selection of products made by Cybozu Labs:

Pathtraq is a tool to monitor and measure surfing behavior of individuals who agreed to the terms of use. Pathtraq’s main purpose is to filter what its users regard as the hottest topics on the web at the moment. Akky said the service can roughly be compared with Alexa.

Japanize is essentially a translation plugin for menus on web pages and dependent on the participation of its members. The site quickly attracted people interested in Non-Japanese web services. There are over 40,000 active users per day whilst contributors already translated menus of over 760 web services from English (and other languages) into Japanese. An expanded service called Mylingual is also available not only for translating foreign languages to Japanese but also for translating menus in any language (out of 56) into German, English, Spanish and others. The service is not yet well known among the potential target users though.

Altspace is a member-only forums service. Using the site is free but an invitation is needed for registration.

Web engineers in Japan form a very cohesive unit (by the way: In English, Japanese programmers prefer to be called “engineer”.). That’s why Cybozu Labs decided to create a meeting point specifically for geeks. Doukaku is a platform on which Japanese engineers take part in programming quizzes from their favourite programming languages. Now more than 10 different language codes can be compared on the same question.

Akky delivered his presentation with a HTML/Javascript based tool called S6 which is also made by Cybozu Labs.

In parallel to his activities at Cybozu Labs, Akky in the last months – together with a partner – secretly developed a Web 2.0 platform offering a completely fresh approach. “Narabe” (still in closed beta) will soon be released simultaneously in Japanese and English (OK, this is a must as Asiajin’s big man).
Narabe’s tag line is “Compare everything”. The goal is to let people contribute comparisons of any kind as easily as possible. As one of the beta testers, I must say this user-friendly approach works. Using tables, Narabe lets members compare basically everything under the sun: software, cars, web sites, events, persons, restaurants etc. etc. All subjects and criteria can be freely chosen and commented on.

My friend Gohsuke Takama presented the latest state of affairs on the dangers of phishing and security on the web. He is founder and owner of Meta Associates, a renowned IT journalist, the only Japanese board member of Privacy International and founding supporter of the CPSR. Wow!
Picture: Gosuke Takama from Meta Associates 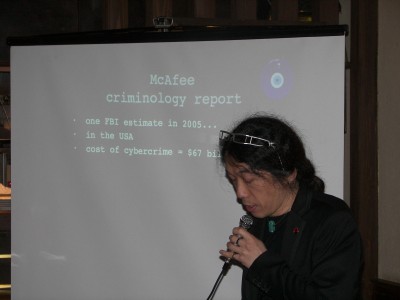 Gohsuke’s presentation was actually very detailed and he touched upon a large number of topics.
Phishing and cybercrime in general
After presenting classic examples of email phishing in text and HTML form, Gohsuke delivered some details coming from McAfee’s Criminology Report 2007. The study reveals for example that the number of Americans affected by phishing/online banking fraud is in the millions. The FBI estimated the total cost of cybercrime to be 67 billion USD in the USA alone (in 2005).
Gohsuke also briefly explained some crime techniques such as website spoofing, sniffers, IP hijacking, pharming and others.
Crime in Web 2.0
Today’s Web 2.0 environment offers criminals a number of additional tools for their illegal activities. Gohsuke said that now the danger of exploiting social interaction, protocols and norms comes into play. According to him, the “human factor” became more and more important in cybercrime in the last years.
Gohsuke added a couple of recommendations for Web 2.0 developers regarding security issues:

More info about the Tokyo2point0 event and network can be found on the official Tokyo2point0 site, the Facebook group or on Mixi.