Today, YAPC::Asia 2008, one of the biggest Perl conference, had been held at Tokyo Institute of Technology, Japan. Serkan, Akky, and I attended the conference.
This time, YAPC has three parallel sessions during two days, and number of registered attendees reached 500. With a help of abundant sponsorship from Perl user companies such as Recruit, livedoor, DeNA, mixi , Yahoo!, and so on, the conference has a free dinner and lunches. It’s really a generous deal considering mere 4500yen ($45) entrance fee. 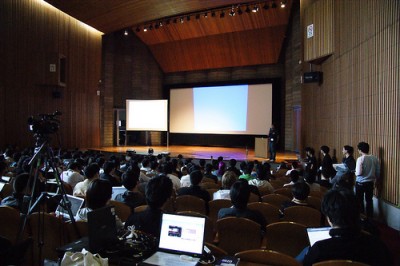 The atomosphere was truly international. Many people are attending from overseas. Half of sessions are done in English.
Jesse Vincent introduced his new distributed database called Prophet. Prophet is an asynchronously replicated distributed database system. It means user can change the database when he’s offline, and can upload when he gets connected. Jesse implemented a bug tracking system on it.
Ikuhiro Ihara revealed Livedoor’s spam filtering engine. Livedoor is providing many services such as blog, wiki, and bulletin board system. All services share same engine to previous dataset of spams. An automatically created IP based apache filter rejects 50,000 to 5 million accesses each day.
He said, on New Year’s Day, everyone writes “Happy new year” on a same time. His filter needs an ad hoc fix not to label those posts as spams.
YAPC::Asia 2008 is organised by volunteers (shibuya.pm). I want to thank them for organising such a great event every year.
I will write a photo report of the conference dinner later.