Former Chunichi Dragon’s baseball player Kosuke Fukudome made an inpressive debut at Major League Baseball opening game at Chicago.
Strange thing is, many fans at the ballpark were raising Japanese signboards “偶然だぞ”, which means “It was lucky” (or you can read it as “It was accidental”). 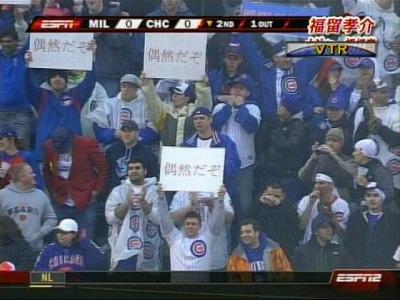 The game was also broadcasted in Japan on NHK Satellite, so that many reports were posted to the biggest Japanese BBS 2-channel. Some said that Chicago Cubs fans are so serious about baseball that they pepped Fukudome “You are luckily here, be humble”, but it sounds unlikely.
Finally, one pointed out that Google Translate generates the exact Japanese sentence from, you know, “It’s gonna happen”. 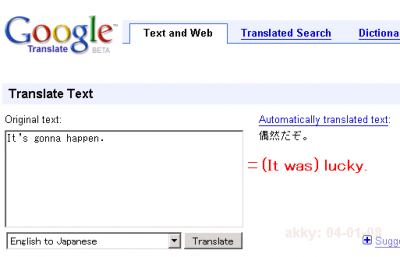 By the way, Fukudome’s “Fuku” may remind you of something else, however “Fuku” means “luck” in Japanese. Those signboards were partially correct by fuku.