This month’s Mobile Monday Tokyo event (held on March 24th near Hibiya park in central Tokyo) was actually an awards show. The so-called “MoMo Tokyo Peer Awards” event featured a total of 12 companies aiming to go to Malaysia in May to represent Japan in the Mobile Monday Global Summit. 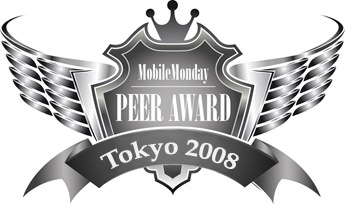 Speaking time was limited to three minutes – the awards show was based on an “elevator pitch” approach.
Bluntly put, I am not sure if all of the contestants were aware what kind of opportunity the event on Monday represented to them. Most of the presentations simply didn’t seem to be well-prepared (slides, flow, language, organization). Some were even just awful, I am sorry to say. Given that approximately 200 industry insiders were present and Mobile Monday events generally attract a lot of attention in the media, this is beyond my understanding. 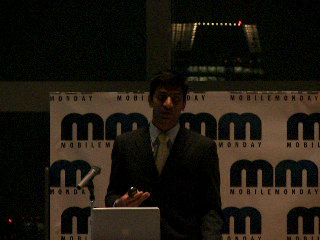 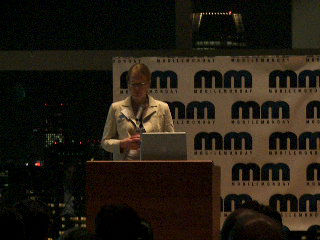 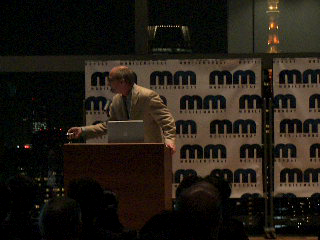 From the 12 companies listed above, English web pages are offered by only six contestants. The same goes for the services pitched themselves. From the three winners, two companies offer Japanese-only web pages and services. Mobile Krishna is not online at all-go figure.
At least, J-Magic’s CEO Takuya told me English translations are being prepared. Overall though, it is commendable that eight representatives of Japanese companies went onstage and made a presentation in English to such a large audience!
I liked this month’s Mobile Monday event much better than the one in February. The venue itself (20F of Shinsei Bank’s HQ) was cool and suitable for an event of this size. The show was followed by a networking session during which attendees could get more information on the competing companies at their exhibition stands.