Rakuten Mart, a new online grocery delivery service run by Japan’s giant e-commerce mall company Rakuten, expanded its delivery areas in Greater Tokyo on March 11, is failing to deliver the ordered foods, lots of bad reviews start circulating on the web.
Rakuten’s own review service is getting harsh reviews, many tells that their ordering foods did not arrive during the time-frame they had asked, they got phone call from delivery staff and if they can come late, for example 1 or 2 a.m. after midnight, when the customers denied because it was too late, they never come back even the days following. Some people wrote that they were told re-delivery on 12th and got another no-show again. Many people worried that if Rakuten would charge their credit card even without delivering any. 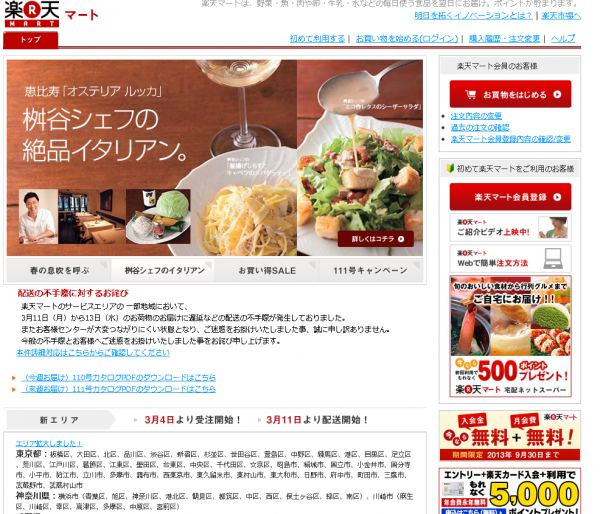 Kakaku.com, the largest product review site is receiving lots of complains, too. When Rakuten removed bad reviews on their e-book reader Kobo, many people used Kakaku.com as an alternative place to post their critics, and this time, some may think that the reviews on Rakuten could be modified.
Rakuten Mart issued an apology on their site a few days later, said that they received too many orders than they had expected. Many orders on 11th were undone, but 12th orders were also too much for them so it prevented the re-delivery of the remained items. They promised that they would refund for all the undelivered items, delivery fee, and plus 1,000 Rakuten points (values 1,000 yen) by April 5.