Facebook’s own advertising tool (and Socialbakers who records its chronological changes) showed that the number of active users in Japan dropped to 13.8 million on Feb. 19, 2 million down from 15.85 million on the former week. It was 12.9% down as low as the end of August 2012. From the peak, 17.1 million on December 27th, 3.3 million users, 19.3% of all, turned inactive. 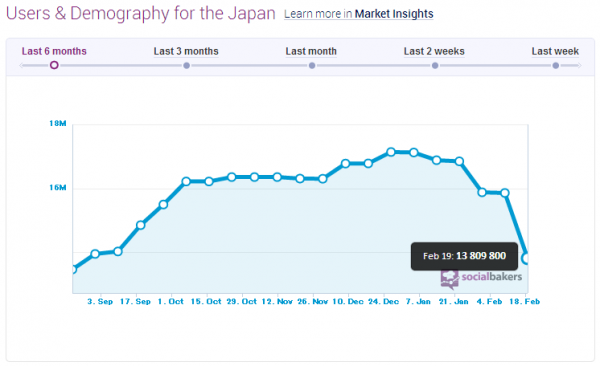 Well, I know that the ads tool number is not perfect, often showed unrealistic up-and-down. And there were not any Facebook-related bad news last week so I guess that most of them did not leave Facebook last week but they gradually stopped using it for weeks. Anyway, that stats is the one always used when discussing on Facebook’s rise, or fall.
US Facebook has been reported its slight decline after taking up over 50% of population, however, in Japan’s case, the penetration rate is still around 10%, and less than 20 million level, where other major social medias like Mixi, Gree and Mobage (and maybe Twitter Japan) got stuck after showing great growth.
Facebook in Japanese apparently is falling out of media’s favor, which has been grabbed by fast-growing Naver Line.