Yahoo! Japan, the largest website in the country, who holds a lot of successful sub-services under its brand, announced today the termination of their Yahoo! Kururu, user-generated summary site.
The service launched September 2011, is often called as “Yahoo!’s Naver Matome”, as the service seemed quite similar to the already-successful info-aggregation site Naver Matome. The word “kukuru” means “to bundle” or “to categorize” in Japanese, which might be chosen to avoid using “matome”(to summalize), whilst another challenger, Japanese net-savvy’ friend Hatena made Hatena Matome. 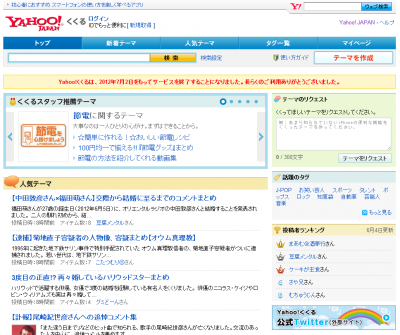 In October 2011, Yahoo! pushed Yahoo! Kururu items on its search results page, which is used more than Google Search. However, it did not really take off. See Google Trends for Websites. It was too late for Yahoo! to notice Naver Japan’s success.

Last month, Yahoo! Japan started providing ads on Naver Matome as an ad network.
Although the notification box on the site says, “Thank you for your long-term support” cliche, it will be run only 10 months. There was a replacement of executive team in March, which may affect this short-term shutdown.