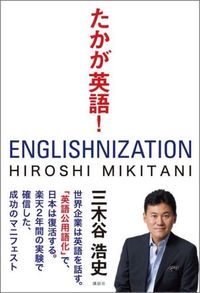 Hiroshi Mikitani, CEO of Japan’s largest online e-commerce mall Rakuten, announced [J] on his twitter account that his new book on how he is letting his company and employees adapt to English.

“I have written up on how to make things into Engligh. It will be great if not only business persons but also several people read it. Same as my past two books, the royalty will be all donated. (link to Rakuten Books page), (book cover image)”

The Japanese title of the book is “Takaga Eigo!”, which means “It’s not more than English.” or “It’s merely English”, but the book cover also has a word “Englishnization”, which was used when Harvard Business Review featured Rakuten’s challenge (Language and Globalization: “Englishnization” at Rakuten).
The bottom of the cover, there is a text saying, “Global companies talk English. ‘Making English an official language’ will revive Japan. This is the manifesto for success (I) convinced by this past two-years experiment on Rakuten.”
The book is 1,050 yen and written in Japanese, I assume.