Amazon Japan’s top page is showing a new text banner that says its e-book reader Kindle will be sold in Japan soon, today on June 26. The time it was displayed seemed around 15:15, 30 minutes ago, by Twitter tweets. 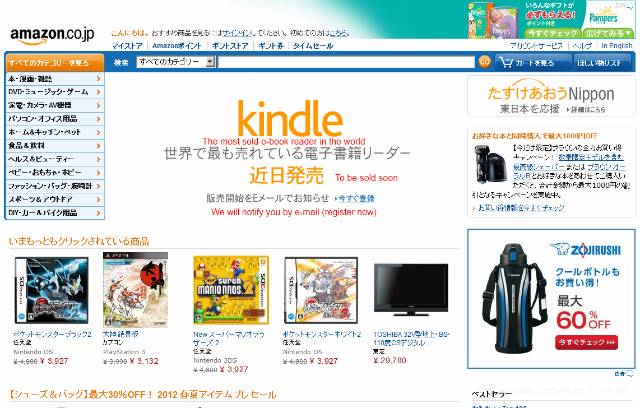 Amazon periodically expressed their putting Kindle to Japan market. There have been also several leaked news reporting that some publishers had agreed with Amazon for several times, which were denied or ignored by the rumored middle-sized publishers like Kadokawa.
Ascii got a comment [J] from Amazon Japan that they would be able to announce something by the end of this year. Ketai Watch was answered [J] that Amazon Japan has no comments on which model of Kindle, price of the hardware and subscription, and the detail of the service.
Japanese e-book market had been larger than US’s until recently despite its smaller population, so it means there are already many e-book players here. Some experts say that Amazon tries to bring the same or similar conditions to Japan with what they contracted with US publishers, which might keep major Japanese publishers away from table of negotiation. Device-wise, the latest Kindle already has an ability to show texts in Japanese fonts.
via Twitter trending topics